Robots to Make iPads and iPhones

Update Required To play the media you will need to either update your browser to a recent version or update your Flash plugin.
By VOA
11 March, 2015


The Hon Hai company is based in Taiwan and operates factories in China. The U.S. company Apple and other top electronic brands hire Hon Hai to make products, including iPads and iPhones.

The CEO of Hon Hai is Terry Gou. Mr. Gou recently told reporters that Hon Hai is replacing 70 percent of its manufacturing process with an automatic system. He says machines will do most of the work that people do now. Mr. Gou expects the changes to be finished in three years.

Jamie Wang is a researcher with a business in Taipei that studies markets. She says using robots is an increasingly common change in manufacturing. Even the popular company Apple is planning to depend more on robots, she says. So, she says, manufacturers like Hon Hai must keep up with the market and reduce their costs. 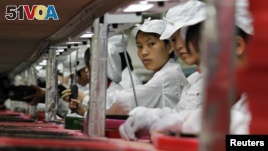 In this 2010 file photo, workers assemble electronics in a Hon Hai, also known as Foxconn, factory in southern Guangdong province May 26, 2010. The factory is a main supplier for Apple's products.

Using robots may also reduce Hon Hai's risk of labor disputes. In the past five years, some workers in Hon Hai's Chinese factories have protested workplace conditions and even killed themselves. The events have damaged the company. Now, fewer workers are depending on Hon Hai for jobs.

Geoff Crothall is a spokesman for the China Labor Bulletin advocacy group in Hong Kong. He says people are no longer forming long lines to try to work in factories. He says some Chinese workers are staying in school longer and seeking higher levels of education. Others are simply finding better jobs in other places.

Companies such as Hon Hai are also facing rising wages for factory work in China. Those wages rose 13 percent in 2014.

At the same time, the cost of living in eastern China is increasing. Some workers are moving to less expensive but less developed cities. And, foreign investments, especially in manufacturing, are slowing. Direct investments grew at only two percent last year.

Liang Kuo-yuan is chairman of the Yuanta-Polaris Research Institute in Taipei. He says companies as large as Hon Hai need to bring more machines into their manufacturing process. He says the company must move toward automatic systems as costs rise and the number of workers drops.

Hon Hai refused VOA requests for details on its plans. But the company has said it hopes to grow in the United States. It also says it wants to open a $1 billion research and development center in Indonesia.

Ralph Jennings reported this story for VOA from Taipei, Taiwan. Kelly Jean Kelly wrote it for Learning English. Caty Weaver was the editor.

robots – n. machines that can do the work of a person and that work automatically or are controlled by computers

labor – n. workers as a group

wages – n. money a worker is paid based on the amount of time he or she has worked