Update Required To play the media you will need to either update your browser to a recent version or update your Flash plugin.
By Bryan Lynn
07 December 2021


Rohingya refugees from Myanmar are taking legal action against Facebook's parent company. Their lawsuit accuses the company of failing to stop hate speech that led to violence.

The refugees are seeking $150 million in the class-action lawsuit. A U.S.-based legal team filed the case Monday in California. 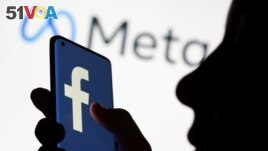 FILE - A woman holds a smartphone with the Facebook logo in front of a display of Facebook's new rebrand logo Meta in this illustration picture taken October 28, 2021.

The case argues that Facebook's parent company, Meta Platforms, should be held responsible for not doing enough to stop hateful posts on the social media service.

The lawsuit states that hate speech that was permitted on Facebook incited violence against the Rohingya Muslim ethnic group by Myanmar's military and its supporters.

The case is based on the combined legal claims of Rohingya refugees. It seeks to cover anyone worldwide who survived the violence or had a family member who died from it. Lawyers in Britain say they plan to bring a similar lawsuit there.

Facebook, which recently changed its corporate name to Meta Platforms, did not immediately answer requests for comment. In the past, the company has admitted that it was "too slow to prevent misinformation and hate" in Myanmar. Facebook said it has since taken steps to reduce the spread of such content.

Members of the Rohingya ethnic group were forced to flee violence and persecution in Myanmar starting in 2017. They began leaving Rakhine state after Rohingya militants launched attacks against security forces. The attacks led to government military action against suspected militants and their supporters.

The United Nations has described the Myanmar military operation as a well-organized example of ethnic cleansing. Myanmar officials have denied the military carried out human rights abuses. It said the campaign was necessary to defend against attacks by Rohingya militants.

Currently, an estimated 1 million Rohingya are living in refugee camps in neighboring Bangladesh. About 10,000 refugees have come to the United States.

United Nations human rights experts investigated the attacks against the Rohingya. In 2018, they said Facebook had played a part in spreading hate speech. Lawyers organizing the case say more than 10,000 Rohingya were killed and more than 150,000 were subjected to physical violence.

The lawsuit argues that Facebook's algorithms helped spread hate speech against the Rohingya people. It says Facebook did not employ enough workers to moderate online material and block false information.

The lawsuit also states that Facebook failed to close accounts and block posts that incited violence or used hate speech directed at the ethnic group.

Facebook has said it is protected from liability over material posted by users under a U.S. internet law known as Section 230. The law states that online publishers are not liable, or legally responsible, for content posted by third parties. The new lawsuit seeks to use Myanmar law in relation to the claims if Section 230 is raised as a defense.

U.S. courts can use foreign law in cases where the activity of companies caused harms in other countries. But two legal experts told Reuters they had not heard of a successful case of foreign law being used in lawsuits against social media companies that were linked to Section 230 protections.

The Associated Press and Reuters reported this story. Bryan Lynn adapted the reports for VOA Learning English. Ashley Thompson was the editor.

class-action – adj. a case that is organized by a group of people who all have the same legal complaint

persecution – n. the treatment of someone unfairly or cruelly because of their race, religion, or beliefs

liability – n. the legal responsibility for something