Update Required To play the media you will need to either update your browser to a recent version or update your Flash plugin.
By Caty Weaver
24 August 2021


Charlie Watts of the British music group The Rolling Stones died Tuesday at a hospital in London.

Watts played drums for the very successful band for almost sixty years. His publicist, Bernard Doherty, said the musician "passed away peacefully" surrounded by his family.

Watts had announced he would not travel with the Stones in 2021 because of an undefined health issue.

Watts was respected worldwide for his muscular style of drumming, which he combined with elements of jazz, a favorite music of the artist. He joined the band early in 1963, just a few months following its first public performance.

Many of the most famous Stones songs, like Brown Sugar and Start Me Up, begin with a short guitar riff that is quickly joined by Watts' beats on the drums. Bill Wyman, the group's bass player often described Watts' skill as "fattening the sound."

The Stones began, Watts said, "as white blokes from England playing Black American music," but quickly developed an identifiable sound all their own. Watts also did many independent musical projects throughout his years with the band. 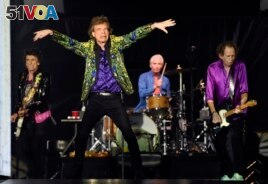 To the world, he was a rock star. But Watts often said that the experience was tiring, unpleasant, and even frightening. "Girls chasing you down the street, screaming...horrible!... I hated it," he told The Guardian newspaper. In another media report, he described the drumming life as a "cross between being an athlete and a total nervous wreck."

Charles Robert Watts was born in London on June 2, 1941. From childhood, he was passionate about music — jazz, especially. He fell in love with the drums after hearing the music of Chico Hamilton. Watts taught himself to play by listening to records by Johnny Dodds, Charlie Parker, Duke Ellington and other jazz greats.

Watts was not a rock music fan at first. He shared a home with the Stones' leaders Mick Jagger and Keith Richards because he did not have to pay for the housing.

"Keith Richards taught me rock and roll," Watts said. "We'd have nothing to do all day, and we'd play these records over and over again."

The Stones had searched for months to find a permanent drummer. Richards has spoken about how much the band wanted Watts to join. The guitar player said the band members cut down on expenses so they could pay Watts a good wage. Watts said he believed at first the band would be lucky to last a year.

"Every band I'd ever been in had lasted a week," he said. "I always thought the Stones would last a week, then a fortnight, and then suddenly, it's 30 years."

The Associated Press reported this story. Caty Weaver adapted it for VOA Learning English. Susan Shand was the editor.

riff – n. a short and usually repeated pattern of notes in a song

passionate – adv. having, showing, or expressing strong emotions or beliefs