Update Required To play the media you will need to either update your browser to a recent version or update your Flash plugin.
By Hai Do
23 October, 2015


"Who am I to judge?" Pope Francis once said in answer to a question about a gay priest. The pope made the comment in 2013, four months into the start of his leadership of the Roman Catholic Church. His answer launched a debate on the church's teachings and direction for one billion Catholics worldwide.

This month, the Pope opened a Synod of Bishops to discuss family issues. The 270 bishops have gathered for the past three weeks to discuss church teachings on homosexuality, marriage and divorce. They also have been discussing the Christian observance of holy communion.

The bishops are to carefully choose every word and vote on each paragraph. They will then present a document to Pope Francis of their discussion of the church's teachings on Saturday. 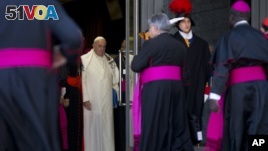 Pope Francis, wearing a scarf which was presented to him by a bishop, arrives for the morning session of the Synod of bishops at the Vatican, Friday, Oct. 23, 2015. (AP Photo/Alessandra Tarantino)

The pope can publish the document or he can just ignore it. He can also use the document as a basis to write his own papal letter.

Last October, Pope Francis published the complete document from the first meeting of the synod. He also published three other paragraphs on the issue of homosexuality, divorces and civil marriage outside the church. The Pope also called on Roman Catholics to become more forgiving with respect to family life.

Father Thomas Reese is a Jesuit priest and writes commentaries for the National Catholic Reporter. He wrote that the synod is still divided on the same issues. Many conservative bishops are against giving communion to people who married without the church's approval. The more liberal bishops want the church to stop using the term "intrinsically disordered" to describe homosexuality.

Archbishop Charles Chaput recently welcomed the Pope at the World Meeting of Families in Philadelphia, Pennsylvania. Archbishop Chaput is among the leading conservative bishops at the synod. He said to the Catholic news site Crux, "I think it's probably good for the Church to put that on the shelf for a while, until we get over the negativity related to it." He added, "That language automatically sets people off and probably isn't useful anymore."

Australian Archbishop Mark Coleridge spoke to reporters from the Vatican on Monday. "I don't think we're ever going to get consensus on some of these hot-button issues," he said. "One thing that is certain about next Sunday is that we won't have finished the task. This journey will continue."

Many observers of the Catholic Church believe that the meeting will end where it began. They suspect there will be no changes on the church's teachings on homosexuality, communion and divorced Catholics.

Others believe a change in language could have the same effect as the Second Vatican Council in the 1960s. The council did not change the church's teachings, but opened the door for a more inclusive Catholic church.

For his part, Pope Francis has already declared a "Holy Year of Mercy" last month. The pope is urging clergymen to forgive women of the "sin of abortion" during the year. Under this policy, women who decided to end a pregnancy may continue to practice their religious beliefs in a formal manner. They can receive sacraments, like communion, and take part in church ceremonies.

We want to hear from you. Let us know what you think in the Comments Section.

gay – adj. showing a sexual desire for someone of the same sex

homosexuality – n. the sexual behavior between members of the same sex

communion – n. the Christian religious service at which bread and wine, or grape juice, are served

paragraph – n. a self-contained area in a report or story

shelf – idiom. to postpone or delay something

hot-button – adj. an issue that is highly charges, emotionally or politically

certain – adj. known for sure

abortion – n. an operation for ending a pregnancy

sacraments – n. a activity that is considered important among Christians