Update Required To play the media you will need to either update your browser to a recent version or update your Flash plugin.
By Alice Bryant
02 February, 2019

The scientists were digging near Solar dos Presuntos, a very famous restaurant in the city.

It was found after the restaurant's owners decided to expand their space, which opened in 1974 in Lisbon's historical center. 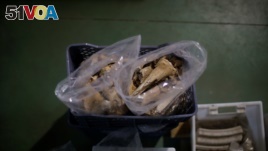 A view of findings from an ancient Roman cemetery with 2000-year-old skeletons and artifacts, found below a restaurant in Lisbon, Portugal, January 24, 2019.

To get the expansion project approved, city officials required that a team of archaeologists first examine the land.

Nuno Neto is an archaeologist and founding partner at Neoepica, the company that performed the dig. His team went down to a depth of around six meters.

Neto told Reuters news agency: "What we found was a big surprise... The level of preservation is excellent, and the set of artifacts is fabulous."

The burial place was found to contain the skeletons of 25 people, 35 sets of burned remains, pottery and money used in ancient burial ceremonies. All have been moved to Neoepica's research laboratory. Later, they will go to the city council.

The findings were made public last month, but archaeologists have been working on the area since 2016.

Workers have begun to build onto the restaurant. The owners see the discovery of the Roman burial site as a good thing. They hope to have some of the ancient objects on display in the future.

Roman armies occupied Olissipo, as Lisbon used to be known, around 200 BC and it remained under Roman control for several centuries.

preservation – n. the act of keeping something in its original state or in good condition

artifact – n. a simple object, such as a tool or weapon, that was made by people in the past

pottery – n. objects, such as bowls, that are made out of clay and then baked at high temperatures so that they become hard

display – n. an arrangement of objects intended to decorate, advertise, entertain, or inform people about something