‘RRR’ Is a Big Success for India’s Other Movie Factory: Tollywood

Update Required To play the media you will need to either update your browser to a recent version or update your Flash plugin.
By Ashley Thompson
29 July 2022


India's film industry is one of the biggest in the world, producing on average 2,000 movies a year. But few of them become popular among Western moviegoers.

"We have a long tradition of storytelling in India. We have probably the oldest and most colorful stories," Rajamouli said. "Not being able to travel across borders has been a disappointment," he said of his limited success in foreign markets. 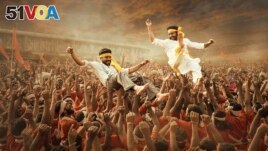 This image released by Netflix shows Ram Charan and N.T. Rama Rao Jr. in a scene from "RRR." (Netflix via AP)

Things might have changed, however, with Rajamouli's new movie RRR. The three-hour-long Telugu-language action film is one of India's biggest hits ever. It has also climbed box-office rankings in the United States.

And it has found bigger popularity on the streaming service Netflix. For nine weeks, RRR has ranked among the top 10 non-English language films on Netflix. It is currently one of the top 10 most popular films in 62 countries. The film is available in 15 languages on Netflix.

RRR is based on Hindu mythology and the freedom fighters who fought British colonialism. For many people, RRR is their first experience with Tollywood, the Telugu movie industry center. For some, it might even be their first time watching an Indian film.

Tollywood, Bollywood and others make up India's huge film industry. The names are meant to sound like the U.S. moviemaking center, Hollywood.

RRR has some special effects that make the film similar to a Hollywood superhero movie. But it is also deeply connected to Indian mythology and present-day conditions.

RRR stands for "Rise Roar Revolt." It also refers to Rajamouli and his two stars, N.T. Rama Rao Jr. and Ram Charan. This is Charan and Rao's first film together. Both come from highly successful families in the movie industry.

They play real-life Indian revolutionaries who team up in 1920s British-controlled India.

In returning to the beginnings of modern-day India, RRR relates to the nationalism of today's India.

The 48-year-old Rajamouli has risen to become one of the country's best-known directors. He launched his two-part Baahubali epic in 2015. The second part, which appeared in 2017, is the country's biggest box-office hit.

Baahubali was a Telugu hit. It was also the costliest Telugu film ever made, with a budget of $72 million. Its success was a sign that Tollywood in India's South had possibly passed Bollywood as the country's top movie factory.

Rajamouli called the worldwide popularity of RRR a surprise to him. The director is now working on his next film. He is often asked about whether he would ever want to make a Hollywood movie. RRR, however, suggests that Western moviegoers are interested in Indian films. And Rajamouli's aim is to make Indian films for India -- and the world.

"Because of the success of ‘RRR' with Western audiences," Rajamouli said, "I am trying to make a film for the entire world."

disappointment –n. something that happens which leaves a person dissatisfied or unhappy

ranking –n. (often pl.) a list of people or things that is put in order of some quality the most popular, numerous, or something else

mythology –n. the ancient stories of a culture

roar –v. to make a loud sound like an animal such as a lion or tiger