Rubber May Soon Come from Weed

Update Required To play the media you will need to either update your browser to a recent version or update your Flash plugin.
By Jeri Watson
06 September, 2014


People have been using products made with synthetic rubber for more than a century. But high-quality tires for cars, trucks and aircraft still must contain 40 percent or more natural rubber.

Rubber trees are not very strong. They often have problems in bad weather and suffer from disease. Naturally, then, scientists are looking for rubber substitutes.

Rubber trees grow mainly on plantations in Southeast Asia. These trees are most productive only under the best atmospheric conditions. They need even amounts of rainfall and bright sunshine -- and no strong winds. Rubber trees can be infected with a plant disease. The disease has ruined many rubber plantations in South America, where the trees first grew.

Dandelion plants are much stronger. Anyone who has dandelions on their property knows how hard it is to remove them. These flowering weeds spread easily. They grow in poor soil and do not suffer too much in a changing climate. But qualities that make people dislike dandelions also make them a possible source of synthetic rubber.

Scientists have known for a long time that the dandelion's milky fluid contains latex, the main substance in raw rubber. The richest source of latex is a plant native to Kazakhstan.

Researchers from Germany are working to engineer the dandelion's genetic material. The researchers are with the Fraunhofer Institute for Molecular Biology and Applied Ecology. Dirk Pruefer of the Institute says the goal is to produce large amounts of latex that can be used in industry. He said one of the most difficult parts of dandelion research was to produce plants that will be economical. 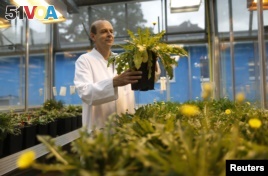 Dirk Pruefer checks dandelions at a greenhouse at the Fraunhofer Institute for Molecular Biology and Applied Ecology (IME) in Muenster August 14, 2014. Research teams are competing across the world to breed a type of dandelion with milky fluid to produce rubber particles. (REUTERS/Ina Fassbender)

"And that is why we're working since years on the breeding program to develop new traits in the plants, stabilized traits – for example, stable rubber content."

The genetically-engineered dandelion is already producing half a ton of rubber per hectare. But Dirk Pruefer says the scientists' goal is about two times as much. They would also like to grow taller plants with upright leaves. Machine harvesting works better with such leaves.

"They made a lot of testing tissues to see the quality of the material. And what you can see is that the quality is similar to that what they have originally done with the rubber from the rubber tree."

Researchers believe rubber-producing yellow blooms may someday cover large fields that are currently not being used because of poor soil.

This report was based on a story from VOA's George Putic. It was written for Learning English by Jeri Watson, and edited by George Grow.

synthetic - adj., of, relating to or produced by scientific methods, as synthetic material

tires - n., rubber objects that fit around a wheel as in a car

plantation - n., a large area of land, especially in a hot part of the world, where crops such as cotton are grown.

source - n., someone or something that provides what is wanted or needed