Update Required To play the media you will need to either update your browser to a recent version or update your Flash plugin.
By Dan Novak
17 January 2022


The Gaza Strip, a Palestinian area on the Mediterranean Sea, has few jobs, little electricity and almost no natural resources. But after four wars with Israel in just over 10 years, it has lots of destroyed buildings, or rubble.

Local businesses are now finding ways to make money from the rubble left behind after years of conflict.

The Gaza Strip suffers from a shortage of construction materials. So, a new industry has started up to reuse the stones, bricks and concrete from the rubble. It provides money to some people. But some are concerned that the reused rubble is not of high quality and might be unsafe. 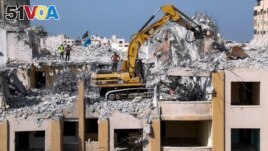 Palestinian workers use a backhoe to break and remove parts of the Al-Jawhara building, that was damaged in Israeli airstrikes during Israel's war with Gaza's Hamas rulers last May, in the central al-Rimal neighborhood of Gaza City, Nov. 16, 2021. (AP Photo/Adel Hana)

"It's a lucrative business," said Naji Sarhan who oversees housing in the territory. He added, "We are trying to control and correct the misuse of these materials."

Israel and Gaza's Hamas rulers have gone to war four times since the Islamic militant group took control of the territory in 2007. The most recent fighting was in May. Israeli airstrikes have damaged or destroyed tens of thousands of buildings in the fighting.

The United Nations Development Program (UNDP) says it worked with local businesses to remove about 2.5 million metric tons of rubble left behind from the wars. Gaza's Housing Ministry says the 11-day war in May left an additional 270,000 tons.

That includes the Al-Jawhara building in downtown Gaza City. Over the past three months, workers have taken the tall building apart floor by floor. They separated twisted metal from the rubble, to be straightened out and reused as building materials.

Israel and Egypt have maintained a blockade on Gaza for the past 15 years. The blockade restricts the entry of badly needed construction materials in the area. Israel says such restrictions are needed to prevent Hamas from using things like concrete and steel for military use. Since 2014, it has permitted some imports. But thousands of homes need to be repaired or rebuilt, and there are widespread shortages.

The UNDP has put restrictions on reusing the materials. It says that renewed rubble is not safe enough for use in building homes and other structures. But it can be broken into smaller pieces to be used for road projects.

The U.N. road projects have provided a partial solution for the rubble problem. But most of Gaza's rubble continues to be used for private businesses. Sarhan said it is illegal to use renewed rubble in major construction. But he said enforcing that ban is very difficult.

Ahmed Abu Asaker is an engineer in Gaza. Many brick factories use the rubble, he said, which is not a "great concern." But he said that a few times it has been mixed into concrete, which is much more dangerous.

There have not been any reports of building collapses. But Abu Asaker estimates that thousands of homes have been built with materials from reused rubble since 2014.

Antar al-Katatni runs a brick factory that uses materials from the rubble. He said internationally supported projects do not use his bricks because they are not permitted to do so. But "poor people do," he added.

A brick costs 2 shekels, or about 65 cents, when made from higher quality Israeli materials. The price for the ones al-Katatni makes is 1.7 or 1.8 shekels. A building often requires several thousand bricks and the price difference can save a lot of money for a poor family.

concrete — n. a hard, strong material that is used for building and made by mixing cement, sand, and broken rocks with water

twisted — v. to bend or turn in order to change its shape

blockade — n. an act of war in which one country uses ships to stop people or supplies from entering or leaving another country