Update Required To play the media you will need to either update your browser to a recent version or update your Flash plugin.
By Phil Dierking
27 January, 2018


Have you ever wondered what wild animals do when no one is watching?

Scientists have been able to document the "private" moments of wildlife with leading edge technology. Low cost, dependable and small modern cameras amount to a big help.

Grant Harris is a government biologist with the United States Fish and Wildlife Service in Albuquerque, New Mexico. In his words, "there's no doubt," that these rural cameras are important tools to learn new information on wildlife.

Harris said some images help scientists see the effects of climate change. For example, the desert animal javelina and the tree-loving coatimundi have been caught on cameras north of their normal habitat. Harris said this could mean global warming is expanding their range northward.

Researchers with the Wyoming Migration Initiative, or WMI, are among those using rural cameras along with global positioning systems, or GPS.

They attach GPS devices to elk, mule deer and antelope in and around Yellowstone National Park. Then they can record their movements, or migrations. But WMI director Matthew Kauffman says as those devices are limited so is the amount of information they can gather from GPS. 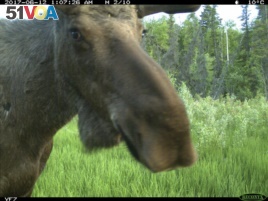 However cameras can be left in very rural areas for days, weeks or even months. They can provide information on how many animals are moving over a given period of time, he said.

"There's this tension between subjectivity in where you put your camera and where it's statistically sound," Harris said.

Rural video can show details about animal behavior, such as the calls made by migrating mule deer. Also, some cameras live-stream animal life, showing everything from bison in Saskatchewan, Canada, to the underwater kelp forest off of California's Channel Islands.

However, rural cameras have their problems too. Animals such as wolverines and bears sometimes attack them. Scientists do not know if the attacks are the result of anger or interest.

Also, the devices have become popular tools to help hunters look for animals. Some people argue that it is unfair to use the cameras that way.

Even with such problems, rural cameras are clearly an important scientific tool in researching wild animals.

Mead Gruver reported this story for the Associated Press. Phil Dierking adapted it for VOA Learning English. Caty Weaver was the editor.

Are you interested in watching video of animals in the wild? We want to hear from you. Write to us in the Comments Section or on 51VOA.COM.

biologist - n. a science that deals with things that are alive

live-stream - v. transmit or receive live video and audio coverage of (an event) over the Internet.

migrate - v. to move from one country or place to live or work in another

moon - v. to bend over and show your bare buttocks to someone as a rude joke or insult

subjectivity - n. based on feelings or opinions rather than facts