Russia Says It Will Withdraw From Syria

Update Required To play the media you will need to either update your browser to a recent version or update your Flash plugin.
By Mario Ritter
14 March, 2016

The move comes on the same day that United Nations peace talks begin in Geneva, Switzerland.

Putin told his defense and foreign ministers that the task of Russian forces in Syria had been fulfilled, according to Russian state-media. 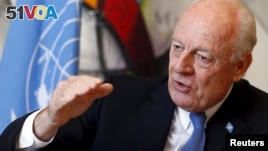 U.N. special envoy for Syria, Staffan de Mistura, said Monday that the only alternative to peace talks is continued conflict.

Putin said the withdrawal would begin March 15, but no time limit was given.

A Russian government website said Putin spoke to Syrian President Bashar al-Assad by telephone. It said they had agreed to withdraw the "main part" of the Russian air force group operating in Syria.

The website said Russia would maintain a "post" for supporting aircraft that observe the ceasefire in Syria.

However, a U.S. official told VOA that, so far, there is "no indication" Russian forces are getting ready to pull out of Syria.

Earlier, the U.N. diplomat for Syria warned that failed peace talks will result in an "even worse war than we had so far."

De Mistura said it is up to the people of Syria to decide their future, and the U.N. must help them.

He said the U.N. plans to hold talks with each side for about 10 days. The next round of negotiations would start again in early April. The envoy said he believes this will map the peace process.

He also stressed the need to maintain what is called a "cessation of hostilities," or ceasefire. That ceasefire, now over two weeks long, has permitted humanitarian aid into areas of conflict.

But serious questions remain about what each side will accept to stop the fighting. More than 270,000 people have been killed since the conflict began. Millions of people have been forced to flee their homes. Many have risked their lives to reach Europe, which now faces a crisis of handling the refugees.

Syria firm on support for Assad

Syria's Foreign Minister has warned that the future of Syrian President Bashar al-Assad is not negotiable. However, the opposition and other critics, including the United States, say Assad must step down.

De Mistura said Monday there is "much distance" between the opponents.

World powers, including the U.S. and Russia, and Syrian neighbors, reached an agreement last year in Vienna. That has been the basis for these peace negotiations. That includes a call for a ceasefire and Syrians creating a roadmap for a new constitution, and elections overseen by the U.N.

U.S. Secretary of State John Kerry noted Sunday violence has been "hugely reduced" by 80 to 90 percent since the ceasefire started.

But he accused the Syrian government of "clearly trying to disrupt" the peace talks. Kerry added that Assad's forces are the "single biggest violator" of the ceasefire. Rebel groups also have been accused of violating the agreement. 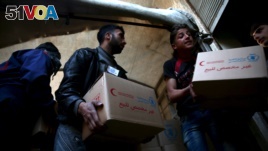 Kerry spoke after talking with top British, French, German and Italian diplomats in Paris about the Syrian crisis.

U.N. officials say the ceasefire has allowed U.N. and other agencies to deliver food, medicine and aid to 115,000 Syrian civilians. Those civilians have lived in areas under siege. They say last year, aid agencies were unable to reach any of these areas.

But Kerry said he continues to be "deeply concerned" about the Syrian government stopping delivery of medical and surgical supplies.

Chris Hannas reported this story for VOANews. Mario Ritter adapted the report for Learning English. Kathleen Struck was the editor.

Do you think Russia will withdraw from Syria? What impact will that have on the region? Please leave a Comment and write to us on 51VOA.COM.

cessation –n. the stopping of some action

disrupt –v. to interrupt or interfere with a process or activity

siege –v. to surround a city or area and prevent supplies or other aid from entering