Update Required To play the media you will need to either update your browser to a recent version or update your Flash plugin.
By Doug Bernard
08 July, 2015


Internet users in Russia will no longer be able to make use of a large database of stored webpages. Critics say the new restriction apparently resulted from a single website that government officials do not like.

Russia's attorney general gave the order to block the website known as "The Wayback Machine." The official said the country has rules that bar young people from sites that contain sexually-related material or extremist activities.

The Wayback Machine stores images of webpages from as early as 1996. It contains almost 500 billion stored images. 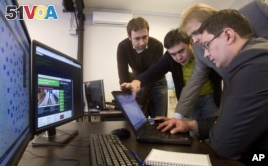 The Russian government says the block is needed to keep dangerous information from reaching young Internet users. But free speech activists argue the ban is just the latest move by the government to remove anything on the Internet it finds objectionable.

A group known as the Russian Pirate Party blames a stored webpage, called "Solitary Jihad in Russia," for the blockage. The webpage states that Islamic law "must be instituted all across the world."

A Russian Internet agency blocked the website in June. The agency says the blockage is needed to protect boys and girls.

The Internet Archive, a non-profit group, hosts the Wayback Machine. The American technology company Google says the site's database has over 35 trillion webpages. Researchers and others use it to see what websites looked like at different times in the past.

The Wayback Machine captures images of webpages from all over the world. The database also gives readers a chance to read news reports and compare them with their local media.

Over the last year, Russia has increased its censorship of the Internet.

In May, a Russian agency sent letters to the U.S.-based web services Twitter, Facebook, and Google. The letters asked for large amounts of private information on Russians who use their services. They also asked for the removal of webpages that called for "unsanctioned protests" in Russia.

Recently, a member of the Russian parliament called for a complete ban on the social media site Facebook. He was critical of Facebook's app that lets supporters of same-sex marriage add a rainbow filter to their profile pictures.

VOA's Doug Bernard wrote this story from Washington. Jonathan Evans adapted it for Learning English. George Grow was the editor.