Russia Could Be Banned From Rio Games After Doping Report

Update Required To play the media you will need to either update your browser to a recent version or update your Flash plugin.
By Dan Friedell
18 July, 2016


The World Anti-Doping Agency, also known as WADA, has called for banning Russian athletes from the Rio de Janeiro Olympics.

WADA called for the ban after confirming that the Russian government worked to cover up doping among its athletes.

Richard McLaren is a Canadian lawyer. He spent 57 days preparing the report for WADA. The report says the Russian government helped the athletes cheat by hiding test results and changing urine samples leading up to both the 2012 Olympics in London and the 2014 Sochi Games. 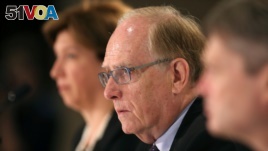 Thomas Bach is the president of the International Olympic Committee, or IOC. He called Russia's actions a "shocking and unprecedented attack on the integrity of sports and on the Olympic Games."

The IOC will meet on Tuesday to discuss a punishment for the Russian Olympic team. It says it will study the report and "not hesitate to take the toughest sanctions available against any individual or organization."

McLaren said his report showed only a "thin slice" of the cheating within the Russian Olympic team.

He found evidence "beyond a reasonable doubt" that the Russian government participated in a program designed to help its athletes use performance-enhancing drugs without being caught. He called the program "fail-safe."

McLaren's report confirms allegations made by the former head of anti-doping in Russia.

Earlier this year, Grigory Rodchenkov told the New York Times that 15 Russian medal-winners from the Sochi Olympics alone were part of a urine-switching program.

In that program, athletes provided clean urine samples to government agents. Those agents then replaced tainted urine with clean urine after competitions.

In late 2015, the International Association of Athletics Federations banned Russia's track and field athletes from competition after a different WADA investigation.

Travis Tygart is the head of the U.S. Anti-Doping Agency. In a statement on Monday, Tygart called the McLaren report "mind-blowing." He said the international community should come together "to ensure this unprecedented level of criminality never again threatens the sports we cherish."

Dan Friedell adapted this story for Learning English based on reporting by VOANews and the Associated Press. Hai Do was the editor.

Do you think the entire Russian Olympic team should be banned? We want to know. Write to us in the Comments Section or on 51VOA.COM.

cherish – v. to feel or show great love for (someone or something)

taint – adj. something that becomes dangerous or dirty especially by adding something harmful or undesirable to it

performance-enhancing – adj. something that is added (a drug or chemical) to make a person perform better than expected

doubt – n. a feeling of being uncertain or unsure about something

slice – n. a small part of something larger

ban – v. to forbid (someone) from doing or being part of something — usually + from

sanction – n. an action that is taken or an order that is given to force a country to obey international laws by limiting or stopping trade with that country, by not allowing economic aid for that country, etc. — usually plural

doping – n. the illegal use of a drug (such as a steroid) to improve an athlete's performance