Update Required To play the media you will need to either update your browser to a recent version or update your Flash plugin.
By Mario Ritter
15 January, 2016

Russia's economy is struggling at the beginning of 2016. Low oil prices and Western sanctions against Russia continue to affect the country's economy.

Prime Minister Dmitry Medvedev thinks the economy is looking better than one year ago. But he told a conference this week that Russia must prepare for the worst-case scenario. In such a case, conditions would worsen, not improve.

Medvedev spoke in Moscow at the yearly Gaidar Forum on economics. He noted that 2015 was probably the most difficult year for Russia economically in the past 10 years. The level of economic activity shrank 3.8 percent last year. 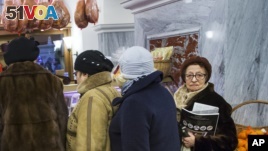 Customers line to stock up for the New Year in GUM Department Store in Red Square in Moscow, Russia, Dec. 29, 2015. Consumer food prices have increased faster than the average rate of inflation: 15.5 percent.

Two main reasons for this were the sharp drop in the price of oil and Western economic sanctions. Oil is Russia's main export. Its price has dropped about 70 percent to $30 a barrel over the past 12 months.

Western countries placed sanctions on Russia because of its 2014 takeover of Crimea. Russia also has continued its military support for rebels in eastern Ukraine. The western measures have cut off Russian banks from international credit. The value of the ruble has dropped from 30 to the U.S. dollar to about 75.

Inflation was a major concern for Russians last year. On average, prices increased at a rate of 15 percent in 2015. Yet consumer food prices increased between 20 and 30 percent. High inflation for staple products has hurt Russia's poor. The number of Russians below subsistence poverty rose to more than 20 million last year from 18 million a year earlier.

Prime Minister Medvedev said the result of inflation was a fall in real incomes. "Many people have become poorer," he said. "And, the middle class has suffered. And, this is probably one of the most painful aftereffects of the last years."

Government officials have said they expect the economy to improve this year. They predict that inflation will drop below 10 percent in February.

Medvedev praised his government's plan for reducing shocks from overseas. He added that the economy was not in tatters.

"Russia is in (the) top 10 countries with the lowest public debt and greatest foreign exchange reserves. And, that really provides for the resilience of our financial system," he said.

The prime minister admitted the federal government would likely face budget cuts. About half of Russia's budget depends on oil export revenues.

VOA's Daniel Schaerf reported on this story from Moscow. Mario Ritter adapted it for Learning English. George Grow was the editor.

sanctions – n. actions taken to force a country or group to obey international rules usually by limiting trade with that country

consumer – n. a person who buys goods or services

subsistence – adj. describing the smallest amount of things like food and water that are needed to stay alive

tatters – n. a state of ruin