Update Required To play the media you will need to either update your browser to a recent version or update your Flash plugin.
By Christopher Jones-Cruise
14 February, 2017


Russian officials hope the new U.S. Secretary of State Rex Tillerson will work to improve relations between the two countries despite the resignation of Michael Flynn, the national security advisor.

Flynn resigned Monday night following reports that he had not told the truth about his contacts with Russian officials. In his resignation letter, Flynn admitted that he had given "incomplete information" about his phone conversations with Sergey Kislyak, Russia's ambassador to the United States. 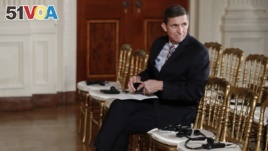 Relations between the two countries worsened after Russia annexed Crimea and began to support separatist rebels in eastern Ukraine in 2014. The United States answered those moves with economic sanctions and bans on visas for some Russian officials.

Flynn was often seen as President Trump's key contact with Moscow. In 2015, he was paid by Russia to attend a dinner for Russia Today, a state-funded television network. He sat next to Russian President Vladimir Putin during the event.

The Associated Press news agency reported the criticisms of Konstantin Kosachev, a member of Russia's parliament. Kosachev said on Facebook that removing a national security adviser for his contacts with Russia is "not just paranoia but something even worse."

But later in the day, Russian officials were less critical.

Leonid Slutsky is chairman of the foreign affairs committee of the lower chamber of parliament. Soon after Flynn's resignation he said it was a "negative signal" for relations between the United States and Russia. But later he said it "cannot fundamentally influence Russia-U.S. ties."

Dmitry Peskov is a spokesman for Russian President Vladimir Putin. The Associated Press asked him if Russia still hopes that relations with the United States will improve. He said it is "too early to say" since "Trump's team has not been shaped yet."

Alexei Makarkin is an analyst at the Moscow-based Center for Political Technologies. He said Tillerson would be negotiating with Russia, not Flynn.

As the former head of the oil company ExxonMobil, Tillerson developed close business ties with Russia. In 2013, Putin even gave him the Order of Friendship. Tillerson is to meet this week with Russian Foreign Minister Sergey Lavrov.

VOA News Writer Penny Dixon reported this story from Washington. We also used material from the Associated Press news agency. Christopher Jones-Cruise adapted the VOA and AP reports for Learning English. Hai Do was the editor.

annex – v. to add (an area or region) to a country, state, etc.; to take control of (a territory or place)

paranoia – n. an unreasonable feeling that people are trying to harm you, do not like you, etc.

shape – v. to influence the development of (something)