Russia Orders Big Cut in US Diplomatic Staff in Moscow

Update Required To play the media you will need to either update your browser to a recent version or update your Flash plugin.
By Bruce Alpert
31 July, 2017


Russia has called on the United States to show "political will" to improve relations between the two countries.

The comment comes one day after Russian President Vladimir Putin ordered large cuts in the number of people working at the U.S. Embassy. Putin ordered the United States to reduce its diplomatic workers in Russia by 755.

Dmitry Peskov is a Russian government spokesman. He said Monday, "We are interested in a steady development of our ties and are sorry to note that we are still far from that."

Peskov said the reduction of diplomatic staff ordered by Putin could include Russia citizens. But it is still likely to require big reductions in U.S. personnel at the U.S. embassy in Moscow.

Putin made his announcement in a Russian television interview on Sunday. He acted after U.S. officials said President Donald Trump would sign into law legislation that places additional sanctions on Russia, and two other countries: Iran and North Korea.

The bill was approved by large majorities in the U.S. Senate and House of Representatives.

Putin said on Russian state television Sunday, "We had hoped that the situation will somehow change, but apparently if it changes, it won't be soon. I thought it was the time to show that we're not going to leave it without an answer."

Putin said that Russia is open to working with the U.S. on issues such as terrorism and cybercrime. But he said it "only hears" false charges of Russian interference.

Russian experts said Putin had hoped for better relations with the Trump administration than he had with former President Barack Obama. Obama had ordered reductions in Russian diplomatic staff to punish Russia for interfering with the 2016 U.S. elections.

Congressional and FBI investigations into possible connections between Trump's campaign and Russia have made it more difficult for Trump to move for improved relations.

Michael O'Hanlon is a foreign policy expert for the Brookings Institution, a Washington think tank. He said, "President Trump himself is already using far tougher words toward Russia than he did as a [presidential] candidate. O'Hanlon also said Trump's top security experts are taking a hard line against Russia.

"If these cuts are real, Russians should expect to wait weeks if not months to get visas to come to U.S." McFaul said on Twitter. He served as U.S. ambassador to Russia from 2012-2014 during the Obama administration.

The sanctions bill passed by Congress places additional economic limits on Russian industries. Russia's economy has already felt the effects from sanctions put in place in 2014. Those restrictions were meant to punish Russia for its annexation of Crimea from Ukraine that same year.

In early July, Putin and Trump met twice during a meeting of the Group of 20 leaders in Germany. During their first meeting, Trump said Putin denied he directed efforts to interfere with the U.S. presidential election. 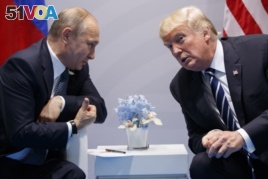 U.S. Vice President Mike Pence spoke in Eastern Europe Monday after the embassy staff reductions were announced by Putin. Pence said there is no bigger threat to Baltic States than Russia.

He said Russia continues to try to change international borders by force, "undermine democracies" and "divide the free nations of Europe, one against another."

Pence spoke in Estonia's capital, Tallinn, after meeting with leaders of Estonia, Latvia, and Lithuania.

Ken Bredemeier reported on this story for VOANews. Bruce Alpert adapted this story for Learning English with additional reporting from Reuters, the Associated Press and other sources. Mario Ritter was the editor.

steady - adj. lasting or continuing for a long period of time in a dependable way

sanctions - n. an action that is taken or an order that is given to force a country to obey international laws by limiting or stopping trade with that country or not allowing economic aid for that country

apparently - adv. used to describe something that appears to be true based on what is known

tougher - adj. stronger than before

visa - n. an official mark or stamp on a passport that allows someone to enter or leave a country usually for a particular reason

annexation - n. to take control of land or a territory