Update Required To play the media you will need to either update your browser to a recent version or update your Flash plugin.
By Dan Novak
30 December 2021

The human rights group has long been criticized by Russian officials. It was found guilty of breaking a law that requires nongovernmental organizations to register as foreign agents if they receive foreign donations.

Kremlin critics said the organization was targeted for political reasons. 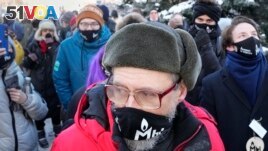 Supporters of the Memorial human rights group wearing face masks with the words "The Memorial cannot be banned!" gather in front of the Moscow Court in Moscow, Russia, Wednesday, Dec. 29, 2021. (AP Photo/Alexander Zemlianichenko)

Memorial International's partner organization, the Memorial Human Rights Center, campaigns on behalf of political prisoners in modern-day Russia. It is also under legal threat. Officials in Moscow Wednesday called for its closure on claims it has been spreading terrorism and extremism in its publications.

"The persecution of International Memorial and Memorial Human Rights Center is an affront to their noble missions and to the cause of human rights everywhere," U.S. Secretary of State Antony Blinken said in a statement late Tuesday.

In a group statement, the German branch of Amnesty International, the Heinrich Boll Foundation, and the Buchenwald and Mittelbau-Dora Memorials Foundation denounced the ruling. They said the Russian government "wants to monopolize individual and collective memory."

Memorial International was co-founded by famous Soviet dissident Andrei Sakharov in 1987, four years before the fall of the Soviet Union. The group's historians located execution sites and mass graves of Stalin's "Great Terror," when hundreds of thousands of Russians were killed. Memorial International tried to identify as many victims as possible.

Several historians associated with Memorial International have been imprisoned in recent years. Gulag historian Yury Dmitriyev this week was sentenced to 15 years in a prison for child abuse. But historians say the charge against Dmitriyev was trumped-up and that he was charged to silence him. Two other Gulag historians have also been jailed on sex-related charges.

Alexei Zhafyarov is Russia's state prosecutor. Before Tuesday's ruling he said: "It is obvious that Memorial creates a false image of the USSR as a terrorist state." He also claimed the group's list of victims included "Nazi offenders with blood of Soviet citizens on their hands."

Stalin's image has been slowly repaired since Vladimir Putin came to power in the late 1990s. Memorial historians say they are in a battle over history and the honest recording of the communist past.

Historian Anatoly Razumov told VOA that officials under Putin see memorializing history as unpatriotic. "The very act of remembrance is frowned on," he said.

Razumov said researching the Great Terror has always been difficult, even during the more liberal years of Mikhail Gorbachev and Boris Yeltsin. He said the period of historical discovery ended in 1997, when Yeltsin declared it as the Year of Reconciliation.

Last year, Putin labeled those who disagree with the Kremlin's version of history as Western "collaborators." And the Investigative Committee of Russia has established a department to investigate "falsifications of history."

Mary Lawlor is the United Nations Special Rapporteur. She warned last month that the closing of Memorial would be "a new low for human rights defenders in Russia." She said the organization's recording of human rights abuses "has for many years made them the target of a government that is ever diminishing the space for public debate."

Jamie Dettmer reported this story for Voice of America. Dan Novak adapted it for VOA Learning English. Susan Shand was the editor.

purge — v. to remove people from an area, country, organization, etc., often in a violent and sudden way

affront — n. an action or statement that insults or offends someone

noble — adj. having, showing, or coming from personal qualities that people admire

monopolize — v. to take over and control

gulag — n. a system of labor camps maintained in the Soviet Union from 1930 to 1955 in which many people died.

trumped-up — adj. deliberately done or created to make someone appear to be guilty of a crime

reconciliation — n. the act of causing two people or groups to become friendly again after an argument or disagreement

collaborator — n. a person who works with another person or group in order to achieve or do something

diminish — v. to become or to cause to become less in size, importance, etc.