Update Required To play the media you will need to either update your browser to a recent version or update your Flash plugin.
By Caty Weaver
19 January, 2016


Russia's Parliament rejected a bill Monday that would have permitted fines or jail time for homosexual acts.

Rights groups have welcomed the move. But, they are also calling for a repeal of a 2013 law that they say has encouraged discrimination against non-heterosexuals. It is called the "gay propaganda" law.

Communist Party lawmakers had proposed the law that was rejected. Had it passed, gay people could have been fined between $50 and $65 for public demonstrations of affection. The proposed measure described such acts as "expression of non-traditional sexual relations." It could also have led to jail time depending on where the act took place.

Human Rights Watch denounced the bill. The group said the measure would have punished people for expressing their identity.
It was a rare win in Russia for lesbians, gays, bisexuals and transsexual people, also known as LGBT.

Human Rights Watch's Russia Program Director in Moscow, Tanya Lokshina, praised the defeat of the measure in an email. "However," she wrote, "the parliament has yet to repeal the 'gay propaganda' bill, which has done tremendous damage to Russia's LGBT people."

The 2013 measure outlaws the "promotion of non-traditional sexual relations among minors." The law has received international criticism. 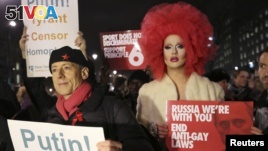 Human rights activist Peter Tatchell (L) protests against Russia's anti-gay stance outside Downing Street, central London February 5, 2014. The protest was held as part of Global Speakout for Russia, which is taking place in more than 30 cities across the

Lokshina says it also has led to increased numbers of attacks on the LGBT community in Russia.

Sandra is a transgender women living in Moscow. She told VOA that she was beaten in broad daylight after the law was passed. Her girlfriend called the police. Officers arrived quickly, she said, but were not willing to arrest her attackers. She said the attackers were not charged with any crime. She said the police insulted her instead.

President Vladimir Putin has defended the "gay propaganda law," saying it does not ban homosexuality. The chief of Russian state media once said the hearts of dead homosexuals should be burned instead of donated. He called them "unfit to live."

LGBT activists continue their efforts for equal rights, however. Vladimir Komov, a Teachers' Union official, and engineer Dmitry Svetly are a gay couple living in Moscow.

"We're not hiding in fear," says Svetly, "For us, being open is a weapon."

homosexual – n. a person who is attracted to others of the same gender

heterosexual – n. a person who is attracted to others of the opposite gender

repeal – v. to take back

affection – n. warm feelings or fondess for something or someone