Russia’s President: No Expulsions to Answer US Punishments

Update Required To play the media you will need to either update your browser to a recent version or update your Flash plugin.
By Bruce Alpert
30 December, 2016


Russian President Vladimir Putin said Friday that he has decided not to expel American diplomats from his country.

On Thursday, President Barack Obama ordered 35 Russians to be expelled from the United States and other measures.

The moves came after U.S. intelligence agencies said Russia hacked Democratic Party computers and released stolen emails. The agencies said this was done to interfere with the U.S. presidential election.

Putin said Russia "has reasons" to take action against the U.S. But he said he will wait to "plan out further steps" based on the policies of the incoming administration. Republican Donald Trump will replace Democrat Barack Obama as president on January 20.

The Russian officials were ordered to leave the country within 72 hours. In addition, Obama ordered the closing of two Russian properties inside the U.S. He also ordered sanctions against nine Russian individuals, companies and agencies, including the Russian intelligence service.

"All Americans should be alarmed by Russia's actions," Obama said in a statement. He said the "theft" of computer emails and other data, and their release through WikiLeaks, were done to "interfere" with the 2016 U.S. election.

A senior Obama administration official said the United States believes Russia "will continue to interfere" with elections in other countries" and in future U.S. elections.

Trump also released a statement after Obama's announcement. He said, "It's time for our country to move on to bigger and better things."

Trump added: "Nevertheless, in the interest of our country and its great people, I will meet with leaders of the intelligence community next week in order to be updated on the facts of this situation."

When Trump becomes president, he could move to cancel the sanctions ordered by Obama. But he might find opposition from Republicans in Congress who have called for punishments against Putin and his government. 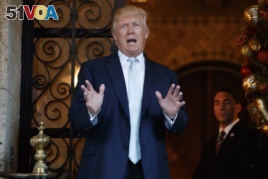 Putin said he decided against any actions -- for now.

"The Russian diplomats returning home will spend the New Year holidays with their relatives and dear ones," Putin said in a statement. "We will not create problems for U.S. diplomats. We will not expel anybody."

Putin said he is inviting all children of U.S. diplomats to holiday parties at the Kremlin.

Dmitry Trenin is director of the Carnegie Moscow Center. Trenin said Putin's decision not to act against the U.S. sanctions appears to be an "investment" in the possibility of better relations with President-elect Donald Trump. Trenin made his comment on Twitter.

Daniel Schearf reported on this story for VOANews. Bruce Alpert adapted this story for Learning English and did additional reporting. Mario Ritter was the editor.

sanctions –n. diplomatic or economic measures taken against a country to punish it for actions considered wrong or illegal

hacking - n. to secretly get access to the files on a computer or network in order to get information, cause damage

alarm - v. to be worried

theft - n. the act or crime of stealing

nevertheless - adv. in spite of what has just been said