Russia Rejects US Criticism of Missile Test that Destroyed Satellite

Update Required To play the media you will need to either update your browser to a recent version or update your Flash plugin.
By Bryan Lynn
16 November 2021


Russia has denied that a missile test that destroyed an orbiting satellite endangered the crew on the International Space Station (ISS).

U.S. officials said Monday the missile hit an old Russian satellite, which burst into more than a thousand pieces. They said this debris – thrown into orbit at about 28,000 kilometers per hour – could cause major damage to the ISS. 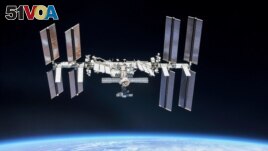 In this file photo, the International Space Station (ISS) is photographed by Expedition 56 crew members from a Soyuz spacecraft after undocking, October 4, 2018. (NASA/Roscosmos/Handout via REUTERS)

The American space agency NASA said all seven members of the ISS crew were directed to seek safety in their spaceship capsules for two hours. The crew includes four American astronauts, a German astronaut and two Russian cosmonauts.

Russia's Defense Ministry confirmed Tuesday it carried out a missile test and destroyed a non-operational satellite that had been in orbit since 1982. But the ministry added that the strike was planned and carried out carefully. It said any resulting debris "did not and will not pose a threat to orbital stations, spacecraft and space activities."

NATO Secretary-General Jens Stoltenberg agreed with U.S. officials that the Russian strike had put the space station at risk. He told reporters in Brussels the action was also concerning "because it demonstrates that Russia is now developing new weapons systems that can shoot down the satellites."

Experts say such tests create clouds of small debris pieces that can crash into other objects, sometimes leading to a chain reaction of dangerous flying objects through Earth's orbit.

NASA said the increased threat could delay some science research and other planned ISS activities. Four of the seven crew members just arrived at the station Thursday night.

The U.S. carried out missile tests on similar satellites in 2008, as did India in 2019. But those tests took place well below the ISS, which orbits around 420 kilometers above Earth.

Reuters and The Associated Press reported on this story. Bryan Lynn adapted the reports for VOA Learning English. Caty Weaver was the editor.

debris – n. broken or torn pieces that come from something larger

reckless – adj. showing a lack of care about risks or danger

pose – v. to cause a problem

chain reaction – n. a series of events in which each one causes the next one to happen