Putin Criticizes US for Publishing List of Influential Russians

Update Required To play the media you will need to either update your browser to a recent version or update your Flash plugin.
By Kelly Jean Kelly
30 January, 2018


Russian President Vladimir Putin has criticized the United States for releasing a list of over 200 people with close ties to the Russian government.

Putin described the release as a hostile and "stupid" move led by opponents of U.S. President Donald Trump.

The U.S. Treasury Department published the list on Monday as required under a law approved by Congress. Lawmakers who voted for the measure wanted to punish Russia for interfering in the 2016 U.S. presidential election.

Some Russians worried that the publication of the list would lead to additional U.S. actions or restrictions from the global financial system. But the publication does not include any new sanctions.

In a written statement, a State Department official said just the threat of sanctions had already affected Russian companies. She said that U.S. officials estimate other countries have cancelled plans to buy several billion dollars' worth of products from Russia's defense industry.

Putin said his government is not going to take any immediate action to answer the U.S. list. And, he said, he did not expect the publication to have an effect.

But the Russian leader also said he was surprised by the number and range of the government officials and business people who were listed.

He said, "Ordinary Russian citizens, employees and entire industries are behind each of those people and companies. So all 146 million people have essentially been put on this list. What is the point of this? I don't understand." 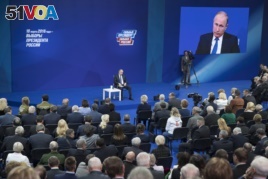 Russian President Vladimir Putin, sitting on the stage at centre rear, speaks to his supporters during a meeting for his campaign in Moscow, Jan. 30, 2018.

Putin also joked that he was offended he was not included. However, every other top Russian government official was, along with the chief executives of all major-state owned companies.

The list shows that the U.S. sees the entire Russian government as enemies, a spokesperson for Putin told reporters on Tuesday.

The chairman of the Russian foreign affairs committee, Konstantin Kosachev, criticized the U.S. for harming relations between the countries. He said that "the consequences will be toxic and undermine prospects for cooperation for years ahead."

Navalny is known for investigating what he calls close ties between government officials and some of the billionaires on the list. The opposition leader wrote on social media that he was "glad that these (people) have been officially recognized on the international level as crooks and thieves."

Trump said at the time that the bill improperly limited the president's power. He said the measures also hurt American companies and the interests of America's allies in Europe.

Some U.S. lawmakers said they were disappointed President Trump had chosen not to punish anyone. Among them is Steny Hoyer, a top Democratic lawmaker in the House of Representatives.

Hoyer said he did not believe the Trump government had "put forth a plan for how it plans to deter further Russian aggression."

Kelly Jean Kelly wrote this story for VOA Learning English. Her story was based on reports from the Associated Press news agency and VOANews.com. George Grow was the editor.

global – adj. of or involving the whole world

sanction – n. a punishment or actions that results from failure to obey a rule or order

range – n. a group of individuals

prospect – n. the possibility that something will happen

paranoia – n. a serious mental disorder; an unreasonable fear that people are trying to harm you

deter – v. to prevent from acting