Update Required To play the media you will need to either update your browser to a recent version or update your Flash plugin.
By Jill Robbins
29 September 2022


Russia plans to officially annex, or seize, parts of eastern Ukraine on Friday. Russian officials said the people of those areas had voted strongly in favor of the move. But Ukraine and Western officials have condemned the Moscow-controlled votes as illegal, forced and dishonest.

Presidential spokesman Dmitry Peskov told reporters on Thursday that four areas of Ukraine - Luhansk, Donetsk, Kherson and Zaporizhzhia - will be added to Russia on Friday. The pro-Russia administrators of those areas will sign treaties to join Russia at a Kremlin ceremony with President Vladimir Putin.

Ukrainian President Volodymyr Zelenskyy announced an emergency meeting with his security and military officials for Friday. He promised tough measures against the move and said it ended any chance of returning to peace talks. The votes "are worthless and do not change reality. The territorial integrity of Ukraine will be restored," he said. 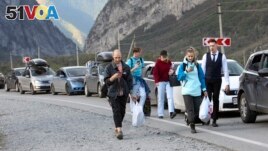 In unusually strong language, U.N. Secretary-General Antonio Guterres told reporters Thursday in New York that Russia's annexation would violate the U.N. Charter and has "no legal value." He described the move as "a dangerous escalation" and said it "must not be accepted."

The result of the voting that ended Tuesday was not a surprise. Russian troops went door-to-door with election officials to collect ballots. Ukrainian officials said they also gathered names of people who voted against annexation. The five days of voting produced unusually high numbers in favor of joining Russia.

Russian-supported administrations in the four areas claimed that 93 percent of the ballots cast in Zaporizhzhia supported annexation, as did 87 percent in Kherson, 98 percent in Luhansk and 99 percent in Donetsk.

German Foreign Minister Annalena Baerbock spoke on the issue at a conference in Berlin. "Under threats and sometimes even (at) gunpoint, people are being taken out of their homes or workplaces to vote in glass ballot boxes," she said.

Last week, Putin ordered a call-up of as many as 300,000 military reservists after several military losses in Ukraine. Putin and other Russian officials also threatened to use nuclear weapons to protect Russian territory, including any annexed land.

The call-up order led to long lines of Russians at the borders trying to leave the country. Russian security reportedly set up checkpoints along the borders with Georgia and Finland to draft some of them.

Novaya Gazeta Europe reported on Monday that 261,000 men had left Russia since the call-up. "The better off and well educated are over-represented amongst those attempting to leave Russia," British intelligence officials said.

Alexander Kamisentsev, who left Russia for Georgia, said he decided at the last moment to leave "because I am not going to kill my Ukrainian brothers or go to prison."

Jon Gambrell and Adam Schreck reported on this story for the Associated Press. Jill Robbins adapted it for Learning English with additional reporting from Reuters.

integrity – n. the state of being a united whole

reservist – n. soldiers who are not serving in the regular army of a country, but who can be called to serve whenever they are needed.

draft – v. to order someone to serve in the armed forces