Update Required To play the media you will need to either update your browser to a recent version or update your Flash plugin.
By VOA
11 September, 2013

Hello, again, and welcome. I'm Jim Tedder in Washington. On today's program, we ask the experts. A wanted American says he wants to live in Russia, rather than face the courts in the United States. What will his life be like? How will he earn a living? What are his new Russian neighbors likely to think of him? That's part one. Then we hear from some health experts about the dangers of toxic wastes in developing countries. If you suspect there are poisons near your home, what can you do?

You've got the questions, and we've got the answers about your world, as it is!

Many people know that former American intelligence specialist Edward Snowden is wanted in the United States on espionage charges. Mr. Snowden is accused of telling the world about secret programs operated by America's National Security Agency.

Edward Snowden worked in Hawaii, where he was cleared to read highly secret government documents. He flew to Hong Kong before some of the details were published in newspapers.

Mr. Snowden arrived in Russia in late June. For more than a month, he was not permitted to leave an airport in Moscow. Then he gained permission to step on Russian soil. He was told he can remain in that country for a year. But the Russian government is restricting what the American can say.

National Security expert David Barrett teaches at Villanova University in Pennsylvania. He says Edward Snowden will no longer be able to talk openly about America's secrets.

"One of the things that (Russian Premier Vladimir) Putin said when he spoke of the possibility of Snowden's staying there is that Snowden would have to be quiet. He would have to stop saying things and revealing things about U.S. intelligence."

Mr. Barrett says Mr. Snowden will not be very happy if he is barred from speaking to reporters and groups about the National Security Agency.

Peter Savodnik is an expert on Americans seeking refuge in Russia. He also believes Mr. Snowden will not be happy there. Mr. Savodnik says Russian officials are able to create what he calls "a sort of gray unhappiness."

He notes what happened more than half a century ago to Lee Harvey Oswald. The former serviceman rejected life in America and moved to Russia for a short time, but then returned to the United States. In 1963, he shot to death President John F. Kennedy.

Mr. Savodnik also notes what he believes has been the unhappiness for people who rejected the United States to live in Russia. He says this includes all such defectors since World War Two. He predicts that Russian officials would want Edward Snowden to live far away from news media. And, Mr. Savodnik says they might send him to live in an area far from a major city. His job might be cleaning floors or working in a factory.

Matthew Rojansky directs the Kennan Institute at the Wilson Center, a research center in Washington. He says no one will be able to trust Mr. Snowden.

"Because it is understood: this is someone who would betray their own country and so that it's hard to respect for most ordinary people including Russians..."

Mr. Rojansky says the Russian decision to let the American stay 12 months will harm its relations with the United States for a long time.

"The Snowden issue is going to remain on those lists that senior American officials take into negotiations for years to come." He says although it may not be at the top of the list, the issue will be there.

Observers say they are sure that Edward Snowden would have a better life in some place other than Russia. But for now, no one knows where that place would be.

They are all over the world, and they can make you sick, or even kill you. They often are what's left over from a manufacturing process. Scientists and health officials call them toxic wastes. Reports say these poisons can be found in large amounts, particularly in developing countries. Caty Weaver joins us now to tell us about the findings, and how we can deal with a dangerous situation.

Millions of people in developing countries live near toxic waste dumps. A new study looked at the dangers of living near these chemical waste sites. 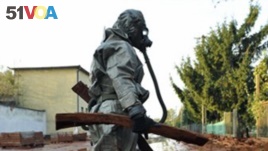 A Hungarian soldier, wearing chemical protection gear, cleans a street flooded by toxic waste.
An environmental organization in New York studied water and soil samples from 373 waste sites. These were in three countries: India, Pakistan and Indonesia. The researchers found that more than 8.6 million people were living near the sites in 2010 and were exposed to many chemicals. Richard Fuller was an author of the study.

"Lead, chromium, mercury, phosphates, different kinds of organic chemicals, pesticides and the like -- they're all over the world, unfortunately."

Mr. Fuller heads the Blacksmith Institute, which paid for the study. The institute works to solve pollution problems in low- and moderate-income countries. The study says people living near the dumps lost more than 828,000 years of healthy life from toxic waste exposure. The researchers based this finding on estimates of illness, disability and early death.

The study found that lead created the highest pollution levels. This metal, if absorbed into the blood, can harm the brain development of unborn babies and lower the intelligence of children. Two-thirds of those exposed to lead near waste dumps in Pakistan, India and Indonesia were children and women of child-bearing age.

Kevin Chatham-Stephens was the lead author of the study. He is a pediatric environmental health expert at the Mount Sinai School of Medicine in New York. He says people living near toxic waste sites can take simple steps to reduce their risk.

"Even though it may not sound like a lot, washing your hands is one of the most-effective ways that we can decrease our exposure to chemical pollutants -- just because we know that oftentimes chemicals such as lead can end up in the dust and if we have that dust on our hands, and then we eat our foods and we wipe our mouths or something like that, then that chemical can then enter into our body."

The Blacksmith Institute is studying toxic waste sites in 70 other developing countries. It hopes to help organize clean-up efforts. Richard Fuller says cleaning up is a slow process, but the countries he is working with have been eager to cooperate.

"Everyone here has the right heart and are keen to do the best that they can. So, we think it's possible. It's just going to take a lot of work."

The study is in the journal Environmental Health Perspectives. I'm Caty Weaver.

And I'm Jim Tedder in Washington. Thanks for being with us today. Remember, there are more Learning English programs straight ahead, and world news at the beginning of the hour on VOA.

But before we move on, a look back to September 12, 1966. Millions of American teenagers, including, well, I won't say who, were gathered around our TV sets waiting for the very first show featuring Micky Dolenz, Davy Jones, Mike Nesmith, and Peter Tork. It was a mix of music and comedy as America's answer to the Beatles was broadcast. Hey! Who are you guys?
Related Articles
go top