Update Required To play the media you will need to either update your browser to a recent version or update your Flash plugin.
By Mario Ritter
04 April, 2018


The leaders of Russia, Iran and Turkey have promised to increase efforts to end unrest in Syria.

A joint statement by the three countries said they wanted to "speed up their efforts to ensure calm on the ground" in Syria. The three also promised that they would work towards "the achievement of a lasting ceasefire" there.

The meeting came a day after United States President Donald Trump announced that a decision on withdrawing U.S. troops from Syria will be made soon.

About 2,000 American ground troops are helping Kurdish fighters in the country's north. Their goal is to defeat supporters of the Islamic State (IS) militant group. IS forces once controlled large areas in Syria and Northern Iraq. 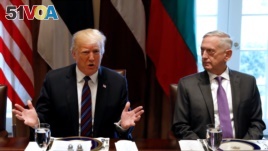 FILE - With U.S. Secretary of Defense James Mattis at his side, U.S. President Donald Trump speaks during a meeting at the White House in Washington, April 3, 2018.

Speaking at the White House on Tuesday, Trump said the goal of defeating the Islamic State in Syria has largely been reached. He said his administration would be making a decision on the troop deployment soon "in coordination with others in the area."

Trump said the United States sent troops to the Middle East 17 years ago, and that it was time to bring them home. He said the military operation has been "very costly for our country," costing about $7 trillion. Trump added that the mission has helped other countries more than the U.S.

On Tuesday, the leader of the U.S. Central Command, Army General Joseph Votel, spoke at the U.S. Institute of Peace in Washington. He said that the IS forces in Syria had mainly been defeated. But, he said the difficult part was still ahead.

"And that is stabilizing these areas, consolidating our gains, getting people back into their homes, addressing the long term issues of reconstruction and other things that will have to be done."

The Associated Press reports that some officials close to the president have advised against a speedy troop withdrawal. They include Central Intelligence Agency Director Mike Pompeo, who has been nominated to be secretary of state.

The president's comments have raised questions about the future of millions of dollars in aid to U.S. allies in the Middle East.

The three countries meeting in Ankara also met last year during negotiations in Astana, Kazakhstan. The AFP news agency reports that Erdogan said the meeting Wednesday and the Astana talks were not an "alternative" to a United Nations peace process for Syria.

The Turkish president told reporters that those at the talks were looking to get something done. "We must get results," he added.

Russia, Turkey and Iran have been working together in recent months, although each side has different goals in Syria.

Russia and Iran have supported the leadership of Syrian President Assad while Turkey has called for his removal. Turkey has supported Syrian opposition fighters in their efforts to overthrow the Assad government.

Turkey strongly opposes armed ethnic Kurdish groups operating in Syria. The United States has provided support to those groups in their fight against the Islamic State.

Turkey's military has carried out an operation to force Kurdish militia fighters from the city of Afrin after launching an offensive inside Syria in January. Turkish officials say the Syrian Kurds have ties to Kurdish organizations banned in Turkey.

The Reuters news agency reports that Iranian President Rouhani said that U.S. forces had "failed to topple the Syrian government." He blamed the U.S. for causing "insecurity" in the area. Rouhani also said he believed U.S. forces would remain in Syria.

The conflict in Syria started after anti-government protests in March of 2011. It is estimated that 350,000 people have died since the start of fighting.

Millions more have fled to become refugees in neighboring Turkey or sought asylum in western countries.

Mario Ritter wrote this story for VOA Learning English. His story was based on reports from Agence France Presse, the Associated Press, the Reuters news agency and VOANews.com. George Grow was the editor.

stability – n. the quality of not changing easily

achievement – n. something that has been done through effort or hard work

coordination – n. organizing people and resources so they work correctly together

consolidating – adj. related to combining or joining together to improve something

alternative – n. something that offers a choice or another way of doing something

topple – v. to bring down, to throw out of power