Update Required To play the media you will need to either update your browser to a recent version or update your Flash plugin.
By Mario Ritter
31 January, 2018


Russia's ambassador to North Korea says oil shipments to the North should not be reduced again.

Speaking on the state-operated RIA news agency, he warned, "We can't lower deliveries any further." He said increased shortages would lead to serious humanitarian problems.

Matzegora added, "Official representatives of Pyongyang have made it clear that a blockade would be interpreted by North Korea as a declaration of war, with all the subsequent consequences."

The United Nations Security Council has passed eight resolutions against North Korea in the last two years. Those resolution placed sanctions on the North by limiting the country's exports and imports and financial activity.

The measures also have put financial and travel restrictions on North Korean officials and barred additional North Koreans from working outside the country.

The United States, South Korea and other countries also have put in place their own restrictions.

The U.N. has set quotas for North Korean oil imports. The ambassador says about 540,000 tons of crude oil are permitted. Over 60,000 tons of oil products from Russia, China and other countries are also permitted he added.

Matzegora said that "is a drop in the ocean for a country of 25 million people."

U.S. President Donald Trump targeted North Korea in his first State of the Union speech to the United States Congress on Tuesday. Trump promised to continue to place pressure on North Korea to keep it from developing weapons that could threaten the U.S. 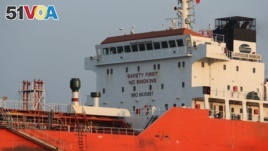 Last week, the U.S. added to existing sanctions on North Korea including measures against its crude oil ministry. Reuter reported that the U.S. Treasury placed restrictions on nine groups, 16 individuals and 6 North Korean ships. The targets of the sanctions are accused of involvement in trading goods used in weapons production.

North Korea has condemned the latest sanctions. North Korean state media said the measures were meant to hurt recently improved ties between the two Koreas. The two sides continue to carry out joint preparations for the 2018 Winter Olympic Games to be held in Pyeongchang, South Korea.

Russia's deputy foreign minister said his country has no obligation to carry out U.S. sanctions.

Other North Korean exports also have been targeted in an effort to punish North Korea for its nuclear and long-distance missile tests.

The Russian ambassador, however, denied that his country is permitting North Korea to use Russian ports to transport coal, another sanctioned product. The U.S. has said such activity would contravene U.N. sanctions on the North.

Mario Ritter adapted it for VOA Learning English from Reuters and AP sources. Caty Weaver was the editor.

interpret –v. to understand in a certain way

subsequent –adj. coming after something else

consequences –n. the results of an action or set of conditions

sanctions –n. measures taken to cause a country to obey international law usually by limiting trade

quotas –n. an official limit on the number of people or the amount of some material that is permitted

obligation –n. something required by rule or law

contravene –v. to fail to do what is required by law