Update Required To play the media you will need to either update your browser to a recent version or update your Flash plugin.
By Caty Weaver
19 December, 2016


A gunman shot and killed the Russian ambassador to Turkey on Monday in Ankara.

"Today in Ankara, as a result of an attack, the Russian ambassador to Turkey Andrei Karlov received wounds that he died from," Zakharova said.

"We qualify what happened as a terrorist act," she said.

The mayor of Ankara has identified the shooter as 22-year-old police officer, Mevlut Mert Altintas.

Three other people were wounded in the attack before security officers shot and killed the gunman.

The shooting took place as Karlov spoke at a photo exhibition organized by Russian embassy. 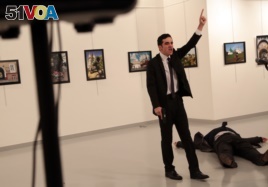 A gunman gestures after shooting the Russian Ambassador to Turkey, Andrei Karlov, at a photo gallery in Ankara, Turkey, Dec. 19, 2016.

The Associated Press news agency said one of its photographers was there when the shooting took place. The photographer reported that a man shouted "Allahu Akbar'' and fired at least eight shots.

"Don't forget Aleppo! Don't forget Syria!" he then shouted in Turkish. "Stand back! Stand back! Only death will take me out of here. Anyone who has a role in this oppression will die one by one.''

A witness told VOA that attendees passed through a metal detector to get into the exhibit. However, they (witnesses) said it did not seem that there was any extra security for the Russian ambassador's presence.

Bahar Bakir, a diplomacy reporter for Haberturk TV, told VOA's Turkish Service that she and other witnesses, in her words, "threw ourselves to the ground with the gunshot sounds.

"I saw that the gun was aimed at the ceiling and I saw the ambassador on the ground unfortunately," she said.

Bakir said she heard 20 to 30 shots as she and others ran from the area.

Russia's RIA news agency said security around the Russian embassy in Ankara has been increased following the shooting.

Russian President Vladimir Putin condemned the killing as an act of terrorism.

"There is no doubt that the committed crime is a provocation aimed at ruining Russian-Turkish relations and the peace process in Syria, which is moving forward with the help of Russia, Turkey and Iran," Putin said.

"We condemn this act of violence, whatever its source. Our thoughts and prayers are with him and his family," the spokesman said.

The United Nations made a similar statement.

"We condemn the gun attack on the Russian ambassador to Turkey...There can be no justification for an attack on a diplomat or an ambassador," a spokesman said.

German Interior Minister Thomas De Maiziere said his government is "in solidarity with Turkey in the common fight against terrorism."

Andrei Karlov was 62. He served as Russia's envoy to North Korea from 2001 to 2006. He later headed the Foreign Ministry's consular department.

He became Russia's ambassador to Turkey in 2013.

VOANews reported this story. Caty Weaver adapted it for Learning English. ­­­­­­­­­­Ashley Thompson was the editor.

exhibition - n. a public show of something

role - n. a part that someone or something has in a particular activity or situation

detector - n. a device that can tell if a substance or object is present

unfortunately - adv. used to say that something bad or unlucky has happened

justification - n. an acceptable reason for doing something

envoy - n. a person who is sent by one government to represent it in dealing with another government