Update Required To play the media you will need to either update your browser to a recent version or update your Flash plugin.
By VOA
06 November, 2015

Investigators are looking for clues about how a jetliner was downed last week. U.S. intelligence sources say the crash happened after a bomb exploded onboard the Metrojet airliner.

That airliner crashed in the Sinai Peninsula last Saturday. All 224 people aboard were killed. The flight was traveling from Sharm el-Sheikh to St. Petersburg. 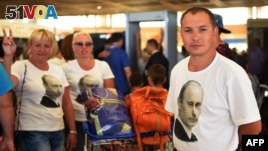 Putin issued the order Friday after Russian security advisors recommended halting flights. Flights will be stopped "until we have determined the true reasons" of the crash, said advisor Alexander Bortnikov.

Russia at first dismissed suggestions that Islamic State members put a bomb on the plane. Thursday, U.S. President Barack Obama said there was "a possibility" a bomb destroyed the jetliner.

British Prime Minister David Cameron also says it is "more likely than not" the plane was bombed.

The terror group Islamic State claimed that it brought down the plane. There is no proof Islamic State bombed the plane. A U.S. official says intercepted information points the finger at terrorists.

Both black box recorders have been recovered.

The VOA staff reported this story for VOANews.com. Jim Dresbach adapted it for Learning English. Kathleen Struck was the editor.

aboard – adv. on, onto, or within a train, a ship, an airplane

shrapnel – n. small metal pieces that scatter outwards from an exploding bomb, shell, or mine