Update Required To play the media you will need to either update your browser to a recent version or update your Flash plugin.
By Ashley Thompson
04 March 2022


Ukraine's capital, Kyiv, is the cultural and spiritual heart of the country. But the city's important cultural places are at risk as Kyiv prepares for more attacks by Russian forces.

On Thursday, the head of the United Nations cultural agency, Audrey Azoulay, called for "protection of Ukrainian cultural heritage" as the conflict continues. UNESCO said it will organize meetings with the county's cultural officials to mark important places with an internationally recognized sign for protection.

Among the sites at risk are the nation's most important Orthodox shrines. Some of the shrines, or places of religious observance, are nearly 1,000 years old. They have stood since the early days of Christianity in the area. 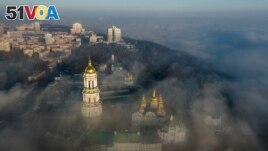 Morning fog surrounds the thousand-year-old Monastery of the Caves, also known as Kyiv-Pechersk Lavra, one of the holiest sites of Eastern Orthodox Christians, in Kyiv, Ukraine on Saturday, Nov. 10, 2018. (AP Photo/Evgeniy Maloletka, File)

The sites are of religious importance to both Ukrainian Orthodox and Russian Orthodox forms of Christianity. They serve as powerful symbols in the dispute over whether the two groups are parts of a single people – as Russian President Vladimir Putin has claimed — or are separate but related ethnic Slavic nations.

The sites include the golden St. Sophia's Cathedral and the Kyiv-Pechersk Lavra – a huge underground and above-ground complex also known as the Monastery of the Caves. Others include the St. Michael's Golden-Domed Monastery and St. Andrew's Church.

"What will be next if even Babi Yar (is hit)" asked Ukrainian President Volodymyr Zelenskyy on Wednesday. "What other ‘military' objects, ‘NATO bases' are threatening Russia? St. Sophia's Cathedral, Lavra, Andrew's Church?"

For example, the Assumption Cathedral in Kharkiv, Ukraine's second-largest city, was damaged in the recent attacks. Its windows were reportedly broken and other parts of the structure were damaged. The cathedral was once Kharkiv's tallest building.

The risk is even greater in Kyiv.

"We're talking about a very old city," said Jacob Lassin. He is a researcher at the Arizona State University's Melikian Center for Russian, Eurasian, and East European Studies. He said of Kiev, "The center part is densely packed. Even if you're trying to hit one thing, you could easily hit something else."

The symbolic value of the shrines is powerful even to people who do not share the religion the shrines are connected to.

"The idea that the main symbol that stood in your city for 1,000 years could be at risk or could be destroyed is very frightening," Lassin said.

Babi Yar is where more than 33,000 Jews were killed within 48 hours in 1941. At the time, the city was under Nazi occupation. It was one of the largest mass killings at a single place during World War II, the U.S. Holocaust Memorial Museum says.

The oldest parts of Kyiv's Orthodox Christian shrines date back to the medieval Kievan Rus kingdom, soon after the area became Christian in the 900s.

Putin has claimed that the kingdom is the common ancestor of today's Russia and Ukraine. Ukrainians answer that they are a separate nation now under attack from a Slavic neighbor.

The cathedral and nearby underground complex represent "a masterpiece of human creative genius," said a report by UNESCO, which lists both places as World Heritage Sites. The Kyiv cathedral, built about 1000 years ago, was modeled after the Church of Hagia Sophia in Constantinople, modern day Istanbul. The cathedral includes artwork up to 1000 years old. The Monastery of the Caves was influential in spreading Orthodox Christianity, said UNESCO.

heritage –n. the traditions, achievements, beliefs, that are part of the history of a group or nation

site –n. the place where something is

symbol –n. a place, action, object, or event, that expresses or represents a particular idea or quality

morale –n. the feelings of enthusiasm and loyalty that a person or group has about a task or job

galvanize –v. to cause (people) to become so excited or concerned about an issue, or idea that they want to do something about it