Update Required To play the media you will need to either update your browser to a recent version or update your Flash plugin.
By Dan Friedell
13 September, 2016


STARTALK is a language immersion program for students and teachers.

Learning a language by immersion means a student is placed in an environment where only the target language is spoken.

The STARTALK program is designed to help more Americans learn languages like Arabic, Chinese, Hindi, Persian, and Russian. Those languages are considered "critical need foreign languages" by the U.S. government. 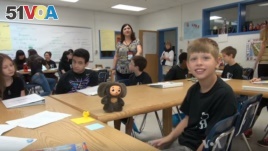 President George W. Bush launched the program as part of a program known as the National Security Language Initiative in 2006.

In the classes, the American teachers and students only speak Russian. They also choose Russian names.

One student, 19-year-old Joseph Doran, chose the name Joseph Timofeyevich. He has spent some time living in Russia. When he was there, he says he ate borscht, the well-known Russian soup made from beets, seven times a week.

"I love Russian culture, language. I love reading Russian classical literature," Doran said. "It is a very interesting language. Russian people are very nice. I love the opportunities that open to me because I know Russian."

Charles Byrd is a professor of Russian at the University of Georgia. He was taking classes for two weeks in Virginia. He said he grew up thinking Russia must have been an interesting place. He had heard it called an "Evil Empire" when he was young.

Byrd's parents were American diplomats. They always wanted to visit Russia, but they were not allowed to go.

The teachers who attend STARTALK each summer meet other teachers and improve their language skills. For the students, they can get better in a short period of time. If the students keep improving, they can point to the time they spent learning Russian one summer as an important first step towards future careers.

Betsy Sandstrom is a program director at STARTALK. She said there are a lot of good reasons for students to want to learn Russian.

"One person wants to become a Russian language teacher, another wants to be a politician," she said. "Knowledge of any foreign language is needed. And Russia is the largest country in the world."

Anush Avetisyan reported this story for VOANews. Dan Friedell adapted the report for Learning English. Mario Ritter was the editor.

What do you think of the language program called STARTALK? We want to know. Write to us in the Comments Section or on 51VOA.COM.

immersion – n. a method of learning a foreign language by being taught entirely in that language

classical – adj. of a kind that has been respected for a long time