Update Required To play the media you will need to either update your browser to a recent version or update your Flash plugin.
By George Grow
01 September, 2018


A few weeks ago, Russian Orthodox Church officials in Eastern Russia announced a project they called "Bells Over Kamchatka."

The announcement appeared on the website of the church's local administrative center in Kamchatka. It stated that Orthodox priests would "carry out meetings" at all the children's summer camps in the area before the beginning of the school year.

The website's story described one priest's visit to the Voskhod (Sunrise) camp. It told how the clergyman spoke about the history of bells in the church. He reportedly gave the children a chance to play another musical instrument -- a miniature carillon.

The visit was set up under a joint program between the local church and the Kamchatka Krai Ministry of Youth and Education. 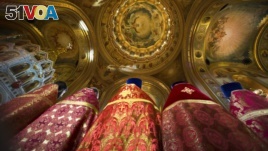 Concerns about clergymen visiting the camps

A week later, a man named Aleksei Nikolayev appealed to the local government for legal action. He was unhappy about what he saw as the church's effort to influence his 10-year-old daughter at the same camp this summer.

"I didn't care about this until it affected me personally," he said. "At summer camp, some priests spoke with my child and this made me mad. I read about it first on [local news website] Kam24 and then, naturally, spoke to the child."

Kam24 reported on August 20 that children at another camp, Mettalist, had been baptized with the permission of the camp officials. In Christianity, the act of baptism shows that a person accepts Jesus Christ and has joined the church. As part of the ceremony, clergy usually place droplets of water on the person's head or the body is briefly covered with water.

Nikolayev said, "I saw several publications on the Kam24 website about how priests carried out a mass baptism of children at the camp.There were reports that members of the National Guard were kissing some [religious] relics." He said the relics were some sort of bones.

Reaction from church and camp officials

A spokesperson for the local church admitted in the Kam24 report that there had been baptisms.

The spokesperson said, "Fourteen children from children's correctional home No. 3 who were vacationing at the Metallist children's camp were baptized." The church also reported that religious workers were appointed as godmothers to the newly baptized children.

Olga Petukhova is the director of the Voskhod camp. She told Radio Free Europe/Radio Liberty (RFE/RL) that she saw no problem with the church's presentation to the children.

She said, "I was personally present during the entire lecture. Father Boris Murzin came and told the children about bells in Russia and gave the children the chance to ring a church bell. I don't understand why some parents are reacting in this way. After all, this is our history, part of our life."

The church refused to comment on the RFE/RL story.

Inna Zagrebina is a lawyer who specializes in church-state relations. She is taking part in Nikolayev's appeal. Zagrebina told RFE/RL that Russian law bars children under the age of 14 from being "drawn into the activity of religious organizations." Other laws protect children under the age of 18, she added, saying that the officials are required to react to concerns from parents of such children.

Zagrebina said that prosecutors would likely be looking into the legal standing of the event and whether there was "an agreement on cooperation" between the camp and the church.

Nikolayev noted that last year, parents at his daughter's school were asked to choose an elective class for religious and moral education. He also said a few years ago parents were unhappy to learn that priests were teaching in public schools.

"People got angry and wrote to the prosecutor and so on," he said. "The priests stopped going to the schools. Now they are going to the camps. They don't give up."

Radio Free Europe/Radio Liberty (RFE/RL) reported this story. RFE/RL and VOA are both part of the U.S. Agency for Global Media (USAGM), formerly called the Broadcasting Board of Governors. George Grow adapted the report for VOA Learning English. Hai Do was the editor.

baptize – v. to officially make someone a member of a Christian religious group

relic – n. an object that is considered holy

godmother – n. a woman who supports someone who is being baptized

lecture – n. a speech or talk given to a group of people