Russian Prime Minister Calls for Ban on Smoking in Public

Update Required To play the media you will need to either update your browser to a recent version or update your Flash plugin.
By VOA
06 November, 2012

Hundreds of thousands of Russians die every year from diseases linked to smoking. The country has one of the highest smoking rates in the world. The World Health Organization estimates that forty percent of adults in Russia smoke. That is about forty-four million people. The WHO says China leads the world in tobacco smoking rates. It says Russia is second.

Russian Prime Minister Dmitry Medvedev wants to reduce the number of smokers in his country. He has proposed a ban on smoking in public places by twenty-fifteen, and a ban on all tobacco advertising. And he wants to increase the country's very low cigarette taxes -- in Russia, a pack of cigarettes can cost between one and two dollars. 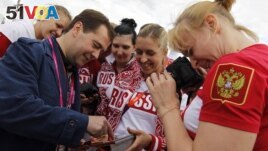 Russia's Prime Minister Dmitry Medvedev meets with members of the Russian Olympic team in London this summer. He recently called for a ban on smoking.
Mr. Medvedev appeared in an Internet video about the issue. He said Russians must stop smoking. He said about ninety percent of Russian smokers begin smoking before they reach the age of twenty. He said smoking kills about four hundred thousand people in Russia each year. He likened the loss of life to a large city disappearing from the country's map.

In the video, Mr. Medvedev also warned about the way smoking kills. He described long and painful deaths from cancer or emphysema, as well as sudden deaths from heart attack and stroke.

Vladimir lives in Moscow. He supports the prime minister's proposals to ban smoking in public.

Vladimir says he does not smoke and does not approve of people smoking in public places. However, many Russians say they will continue to smoke even if there is a ban. They say laws against smoking violate their right to make their own decisions about their health.

Prime Minister Medvedev says a bill putting the ban in place should be approved quickly.

Mr. Medvedev says "I will be direct -- this document is important for every Russian." A Russian health ministry official told the Interfax news agency that the government wants to cut the smoking rate in half.

The upper and lower houses of parliament must consider the bill. Many experts say the government does not have enforcement power even if lawmakers pass the measure.
Related Articles
go top