12 Russians Accused of Hacking Democrats in 2016 US Election

Update Required To play the media you will need to either update your browser to a recent version or update your Flash plugin.
By Ashley Thompson
13 July, 2018


The United States Justice Department has announced charges against 12 Russian intelligence officers for hacking during the 2016 presidential campaign.

The legal action is part of the investigation of special counsel Robert Mueller. His team is investigating efforts by Russia to influence the 2016 U.S. presidential election. That includes any links with the campaign of then candidate Donald Trump. 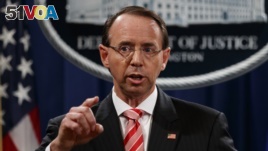 The Russians are accused of breaking into the computer networks of several organizations of the Democratic Party to steal emails. The affected groups include the Democratic National Committee, the Democratic Congressional Campaign Committee and the presidential campaign of Hillary Clinton.

The Russians also are accused of releasing stolen emails on the internet in the months before the election.

Before Friday, Mueller's group had charged 20 people and three companies in its investigation. They include four former Trump campaign and Trump administration aides.

Meuller also has brought charges against 13 Russians or Russian groups. They are accused of taking part in a hidden but powerful social media campaign to influence public opinions in America before the November 2016 elections.

Rosenstein said he had informed Trump about the charges.

He said there was no evidence that the hacking changed any vote count. The charges said that no Americans were knowingly in communication with any of the Russian intelligence officers.

hacking –n. to secretly gain access to a computer network to get information or to cause damage