Update Required To play the media you will need to either update your browser to a recent version or update your Flash plugin.
By Kelly Jean Kelly
18 June, 2019

The 86-year-old judge was named the best real-life hero by supporters voting online.

Ginsburg's opinions often match those of liberal thinkers. This week, however, she agreed with one of her conservative colleagues on a case. Ginsburg and Justice Neil Gorsuch argued that state and federal governments cannot put a person on trial twice for the same crime.

The issue has received attention because of a situation involving people who used to work for U.S. President Donald Trump. The federal government has found some of the individuals guilty of crimes. If Trump pardons them, observers have asked, can state governments later put them on trial for the same violations?

The other seven justices on the U.S. Supreme Court said yes. Although Ginsburg did not win the majority's support for her position, her willingness to think independently has often won her praise. 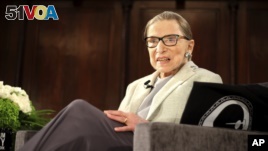 Last weekend, it won her an award from people who watch TV and movies. Ginsberg did not appear personally at the event. But, as a winner, she joined actors Elisabeth Moss and Brie Larson.

The two were recognized for their performances in the TV show "The Handmaid's Tale" and the superhero movie "The Avengers."

pardon –v. to officially declare that someone found guilty of a crime will be permitted to go free and not be punished