Update Required To play the media you will need to either update your browser to a recent version or update your Flash plugin.
By Dan Friedell
30 September, 2016

American David Johnson is now a hero to every sports lover who ever thought "I could do it better than the professional."

Johnson was in the crowd as pro golfers warmed up for the Ryder Cup on Thursday in the American state of Minnesota. 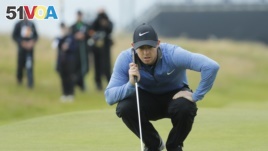 Rory McIlroy, of Northern Ireland, saw a fan come out of the stands during a Ryder Cup practice round a make a big putt.

The Ryder Cup is a golf competition between teams of men from Europe and the United States. The event takes place every two years. It runs through Sunday.

Johnson was watching the European players work on putting at the sixth hole of the Hazeltine National Golf Club. The players were Rory McIlroy, Andy Sullivan, Henrik Stenson and Justin Rose. They are four of the best golfers in the world.

And they were unable to hit the ball into the hole from about four meters away. They tried a number of times and continued to miss.

From the crowd, Johnson shouted that he could make the putt. And the golfers asked him to come out and show them.

One of the pro golfers even told Johnson he would give him $100 if he made the putt.

So Johnson, wearing blue jeans, a baseball cap, and a red jacket, took a putter and studied the green. As he prepared, another person said "there's millions of people watching!"

Johnson took a short stroke, hit the ball, and it went right into the hole.

Thousands of people cheered. Johnson pumped his arms, made a fist and raised his hands into the air. The four pros all gave him a handshake.

Johnson, a 30-year-old from North Dakota, became a star almost immediately. After the show, he spoke with sports reporters for television stations and news agencies.

McIlroy recorded the incident on his mobile phone and put the video on Twitter.

What do you think of Johnson's putt? We want to hear from you. Write to us in the Comments Section or on our Facebook page.

tournament – n. a competition or series of events that involve many players or teams and that usually continues for several days

putt – v. to hit a golf ball with a special club (called a putter) so that it rolls along the ground toward the hole

fist – n. a hand with the fingers bent down toward the palm

mobile – adj. able to be moved from one place to another