Sale of Nobel Prize Brings in $103 Million for Ukrainian Children

Update Required To play the media you will need to either update your browser to a recent version or update your Flash plugin.
By Bryan Lynn
21 June 2022


A Nobel Peace Prize won by Russian reporter Dmitry Muratov last year has been sold in an effort to help Ukrainian child refugees.

The award sold for $103.5 million during an auction in New York Monday night. The auction company that held the sale, Heritage Auctions, did not identify the buyer. The auction, which lasted about three weeks, ended on World Refugee Day.

Heritage said all the money will go to the United Nations children's agency UNICEF. The organization is currently involved in efforts to help children displaced by the war in Ukraine. 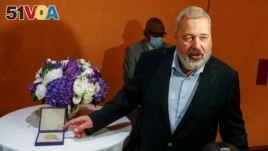 Nobel Peace Prize winner Dmitry Muratov, editor-in-chief of the influential Russian newspaper Novaya Gazeta, poses for a picture next to his 23-karat gold medal before it is auctioned at the Times Center, Monday, June 20, 2022, in New York. (AP Photo/Edua

The Associated Press reported the sale broke the record for a Nobel Prize that has been publicly sold. The highest price paid for a Nobel had been $4.76 million in 2014, the news agency said. That prize was co-awarded to American James Watson in 1962 for his efforts in discovering the structure of DNA.

Muratov told the AP he was surprised at the award's high selling price. "I was hoping that there was going to be an enormous amount of solidarity, but I was not expecting this to be such a huge amount," he said.

Muratov was awarded the Nobel Peace Prize in October 2021. He shared the prize with reporter Maria Ressa of the Philippines. The two reporters, or journalists, were honored for their efforts to safeguard free speech in their countries while facing heavy government pressure.

Muratov dedicated his award to six Novaya Gazeta reporters who had been murdered after reporting on human rights violations and corruption in Russia. He donated $500,000 of his Nobel Prize money to aid organizations.

Muratov has been highly critical of Russia's 2014 annexation of Crimea and the war Russia launched in February in Ukraine. The latest conflict has led nearly 5 million Ukrainians to flee to other countries for safety. The war has created the largest humanitarian crisis in Europe since World War II.

Independent journalists in Russia have increasingly come under pressure from the Russian government. Since President Vladimir Putin came into power more than 20 years ago, about 24 journalists have been killed, the AP reported.

DNA – n. deoxyribonucleic acid: a chemical in the cells of living things that contains genetic information

solidarity – n. agreement and support between people in a group who have similar aims or beliefs

dedicate – v. to officially honor or remember someone or something

annex – v. to start to control or rule an area of another country