Salt Is More Than a Four-Letter Word

Update Required To play the media you will need to either update your browser to a recent version or update your Flash plugin.
By VOA
06 December, 2014


On today's Words and Their Stories we talk about a common word, a small word, but a word that is completely necessary for human life. In fact, without this simple, everyday material, all humans would die.

You may think, salt is just a simple cooking element we shake on our food for a little extra taste. But salt is much more than that. 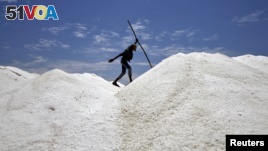 India is the world's third largest salt producing country in the world. Here, a worker walks through a mountain of salt near the southern Indian city of Chennai in April 2014.

Without salt our muscles would not move. Our nervous systems would not operate. Our hearts would not beat. Salt means life.

But do not think rubbing salt in a wound will help. Doing that would be painful and not heal the wound. To rub salt in a wound is an idiom that means to purposefully make a bad situation worse.

Early humans got the salt they needed to stay alive from the animals they killed. But advances in agriculture led to a diet low in salt. So, humans needed to find others sources.

Those who lived near the ocean or other natural sources for salt were lucky. Those who did not had to trade for salt. In fact, people used salt as a method of payment in many parts of the ancient world. The word "salary" comes from the word "salt."

Salt also played an important part in population movement and world exploration. Explorers understood that if they could keep food fresh, they could travel longer distances. So they used salt to preserve food and explored the world.

Salt also changed the way nations fought. With preserved food on ships, nations could sail to distant lands ... and then attack them.

Salt was so important that, according to food historians, it was traded pound-for-pound for gold. Today, people still use the expressions to be worth one's salt or worth one's weight in salt. The expressions describe a person who is useful, a person of value.

A person might also be called salt of the earth. That description means he or she is dependable and trustworthy. The phrase comes from the Christian Bible. Jesus called his loyal group of followers -- or disciples -- the salt of the earth.

But one of these disciples was not so loyal. The disciple Judas betrayed Jesus. In his famous painting "The Last Supper," Leonardo da Vinci shows Judas spilling a bowl of salt. Spilled salt is a sign of bad luck and trouble. And trouble is exactly what Judas gave Jesus.

Even today, some people throw salt over one shoulder if they spill it. They believe throwing salt behind them scares any devil that has been following them -- or at least blinds it for a second while they run away.

But these stories about bad luck should be taken with a grain of salt. In other words, listen to a story or an explanation with suspicion and distrust.

But you don't have to take the information you find on VOA Learning English with a grain of salt. We do our research.

And this research led to some interesting facts about salt in other cultures and religions.

In 2200 BC, the Chinese emperor Xia Yu created one of the first known taxes. He taxed salt. And Egyptians preserved dead bodies with salt, creating mummies.

The Catholic Church uses salt in many of its rituals. Buddhists use salt to prevent evil. In Japan, the Shinto religion uses salt to clean an area of evil. In the U.S. Southwest, the Pueblo people worship the Salt Mother.

And in 1933, the Dalai Lama was buried sitting up in a bed of salt. Today in India, salt is still a symbol of good luck.

What about your culture? Do you have any idioms or expressions about salt? In the comments section, share a story of salt from your culture.

Join us again for another Words and Their Stories, where we take a deeper look at words in American English.

This short video on the history of salt is part of a longer documentary produced by the History Channel.