Update Required To play the media you will need to either update your browser to a recent version or update your Flash plugin.
By VOA
14 June, 2015


Myanmar officials are making plans for a $6 billion hydropower dam in Shan State. The hydropower dam project has fierce critics, including Shan state residents. They say the project will flood an area nearly the size of Singapore and destroy 100 communities.

Ethnic Shan community groups and environmentalists are appealing for help to fight the "Mong Ton" project. It is just one of five actively planned hydropower projects planned for the Salween River.

About 16 Shan organizations released a statement in Bangkok this week. It said Myanmar's government would probably send in troops to secure land for the dam project. The groups warned that an increased military presence could restart civil war. The statement noted that the area is already unstable. 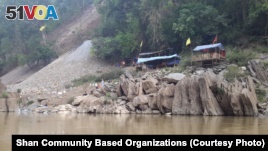 The proposed 241-meter high dam would produce more than 7,000 megawatts of electricity. Almost all of it is to be exported to China and Thailand.

Mong Ton would be Myanmar's largest hydroelectric dam and the tallest dam in Asia, except for China and India.

Pianporn Deetes is with the Thai office of the environmental group International Rivers. In his words, "Not many eyes are on this river basin."

The Shan ethnic group has been involved in several civil wars with Myanmar's central government over many years. The Shan held several protests in April and May in an attempt to halt work on the project. At the time, a large Australian company was performing environmental and social impact studies. The company is Snowy Mountains Engineering Corporation, or SMEC.

The statement from Shan groups criticized SMEC's study process. It said the process was dishonest and that the company planned to support the project from the start.

The statement criticized the actions of SMEC workers last month. It said they "angered local villagers by only explaining the positive impacts of the dam, giving them gifts' which they saw as bribes, and persuading them to sign documents they didn't understand."

This reportedly happened a month after Australian Federal Police raided SMEC International headquarters in New South Wales. The police were said to be investigating reports of foreign bribery.

Australian investigators have not said whether the reported wrongdoing involves the project in Myanmar. SMEC has not answered questions from VOA about the accusations made by dam opponents.

Myanmar, also known as Burma, has long planned to build a dam in the area. A Japanese company did the first feasibility study in 1981. There was a ceremony in 2007 to open the project. But, little work has been done since.

The dam is expected to take 12 years to build. Separate ethnic armies in Shan state have long fought against the central government. The state also is home to most of Myanmar's opium poppy crops.

Local environmentalists say Chinese workers connected to the dam project have been in the area for years. Some of the Chinese workers were kidnapped in May 2011 and later rescued by a Shan army. Since then, thousands of Myanmar government soldiers and police have guarded in the area. They sometimes fight with ethnic rebels.

Few people live in the area that activists say would be flooded. A government campaign against rebels in the late 1980's forced about 300,000 Shan villagers to flee.

The Shan statement from Tuesday says, "The remaining (rural) communities continue to suffer from abuses committed with impunity by government troops."

The Salween is one of the longest free-flowing rivers in the world. It runs 2,800 kilometers from the mountains of Tibet through China, Myanmar and Thailand. Its waters flow into the Andaman Sea.

Myanmar's government has not publicly answered the villager's objections to the project. Officials in the past have praised the Salween dam projects as helpful to the local populations. They have said the dams will help make electricity for Myanmar and lead to peace.

But, critics say the dam will help only wealthy and important people in Thailand and Myanmar. They say those people will profit from selling electricity around a region of fast-growing cities.

VOA Correspondent Steve Herman reported on this story from Bangkok, Thailand. Caty Weaver adapted it for Learning English. ­­­­­­­­­­­­­George Grow was the editor.

feasibility study – n. a study to show if something can be done

impunity – n. freedom from punishment, harm, or loss — usually used in the phrase with impunity

Do you think local populations should have more control of rivers and lands in their area? Do you trust your government to make good environmental decisions? We want to know what you think. Post your answers in the comments section.