US Supreme Court Rules Same-Sex Marriage Is Legal in 2015

Update Required To play the media you will need to either update your browser to a recent version or update your Flash plugin.
By Kelly Jean Kelly
26 August, 2018


The Supreme Court often looks at a major social issue over a series of cases. In the late 1990s and early 2000s, it considered the rights of gay people.

At the time, voters in many states had approved laws strongly limiting gay rights. For example, police in Texas were permitted to arrest same-sex partners. Around the same time, voters in other states began permitting official same-sex unions.

Like voters, the Supreme Court members were divided about the issue. But in three cases, a majority struck down laws limiting homosexual relationships. 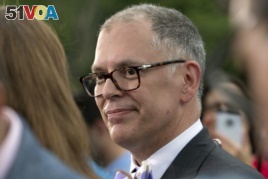 Jim Obergefell was the lead plaintiff in the case Obergefell v. Hodges.(AP)

The fourth case was brought by a man named Jim Obergefell. He had married a man named John Arthur in the state of Maryland, where gay marriage was legal. But the couple lived another state, where it was not. Three months after they were married, Arthur died. The question was: what would the official death certificate say? Was Arthur married? Or not?

The dispute made its way to the Supreme Court in 2015. Five of the nine justices sided with Obergefell. Yes, they said, he and Arthur were married, and the death certificate must say so. Their decision made gay marriage legal in every state.

homosexual - adj. based on or showing a sexual attraction to people of the same sex

gay - adj. of, relating to, or used by homosexuals

death certificate - n. an official document that gives information about a person's death