Update Required To play the media you will need to either update your browser to a recent version or update your Flash plugin.
By Bryan Lynn
29 March, 2017


Samsung has launched its much-awaited new smartphone, the Galaxy S8.

The device was introduced during a media event Wednesday in New York. The launch came after Samsung was forced to recall millions of its troubled Note 7 devices last year.

Samsung's chief of mobile operations, D.J. Koh, began the event by admitting the company had faced a "challenging" year. One filled with "valuable lessons and hard decisions." But he said the launch marked an important new beginning.

"Today, I'm excited to show you a new phone that extends our heritage of great innovation and stunning design."

The company said one of the most exciting features of the S8s is what it calls the Infinity Display. This end-to-end design gets rid of a structured edge, resulting in curving on all sides.

The frame has also been reduced on the new phones, giving more room for the display. Also, the S8 does not have a separate home button – a virtual home button is built into the display.

"In other words, we've redesigned the smartphone from the inside out – to unbox the screen and unleash its infinite potential." 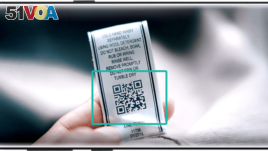 Samsung's new Galaxy S8 smartphone includes built-in technology that automatically searches based on photos and pulls up information for the user. (SAMSUNG)

The company said users can take photos of books, food or other products and Bixby will automatically search and bring up information on them.

The S8s include a higher quality 8 megapixel camera in front, with a 12 megapixel one in the back. Samsung also launched a new virtual reality camera, called Gear 360, which can support the highest quality video, 4K. 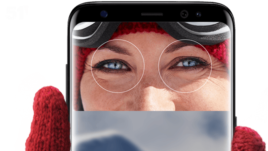 The new phones come with iris and facial recognition technology that the company says lets users unlock a device just by looking at it.

The Galaxy S8 and S8+ will be available for pre-order beginning March 30 and will begin shipping to the U.S. on April 21. Prices have not yet been announced.

Samsung issued a worldwide recall of its popular Galaxy Note 7 devices last September after repeated overheating problems. A company investigation found the overheating was linked to batteries that caused some devices to catch fire.

This week, the company said it plans to sell some refurbished Note 7 phones with new batteries that passed new safety tests. Some parts from recalled devices will also be used in future phones.

The decision came after environmental group Greenpeace and others had urged Samsung to come up with a plan to recycle the troubled devices.

Samsung is still working on plans for how and where the refurbished devices will be sold. But the company said they would not be for sale in the United States or India.

heritage – n. traditions, beliefs, etc. that are part of a group of nation

virtual – adj. existing on computers or the internet

unleash – v. allow something to happen suddenly or unexpectedly

iris – n. the colored part of your eye