Update Required To play the media you will need to either update your browser to a recent version or update your Flash plugin.
By Bryan Lynn
11 October, 2016


Samsung says it has permanently halted production of its Galaxy Note 7 smartphone after continued overheating problems.

The company announced Tuesday it had stopped manufacturing and selling the troubled devices. Samsung said it was acting to protect the safety of phone users.

The company issued a worldwide recall of Galaxy Note 7 devices in early September after receiving several reports of overheating problems. The overheating was linked to problems with batteries that caused some phones to catch fire. 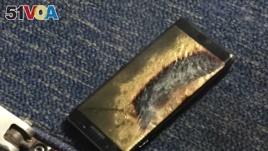 The burned Samsung Note 7 smartphone belonging to Brian Green is pictured in this undated handout photo obtained by Reuters, Oct. 6, 2016.

After the recall, Samsung began replacing customers' phones with new Note 7 devices that had a different battery. Those devices were supposed to be safer. But there were numerous reports of those replacement phones also overheating.

South Korean safety authorities are investigating the problems with the replacement devices. They have not yet identified a cause.

The company is offering to give buyers their money back or exchange the Note 7 phones for other Samsung models.

The Federal Aviation Administration issued a warning to airplane passengers last month about the Galaxy Note 7 phones. It told passengers not to use devices during flights. It also urged them not to put the phones in checked baggage.

Samsung is the world's largest maker of smartphones, with nearly twice the world market share of its main competitor Apple.

Jonathan Roubini is an independent technology analyst. He says in addition to the actual smartphone problems, the company has also been criticized for the way it dealt with the first phone recall.

"This is very damaging for Samsung. And the fact that they messed up on the recall makes things extremely worse. Clearly, after new phones have been released after the recall, and the new phones have issues as well, there's something else in the phone that Samsung missed, and they should be fixing."

"Not only is it lost sales and replacement sales, but you are also talking about damage to Samsung's reputation. Will consumers now question whether other Samsung products also face challenges and then simply decide to go with an alternative brand, be it Apple or someone else."

Bryan Lynn wrote this story for VOA Learning English, based on reports from VOA's Richard Green and Victor Beattie, the Associated Press and Reuters. Ashley Thompson was the editor.

battery – n. power source placed inside a car or other device to supply it with electricity

replacement – n. a thing that takes the place of something else

reputation – adj. the opinion of a person or company as it relates to past performance and behavior

consumer – n. person who buys or uses goods or services

alternative – adj. – different from the usual or conventional