San Francisco Is Home to World’s Oldest Fish in Aquarium

Update Required To play the media you will need to either update your browser to a recent version or update your Flash plugin.
By Dan Friedell
27 January 2022


The California Academy of Sciences in San Francisco believes it has the world's oldest living fish in an aquarium.

The fish is an Australian lungfish, and it lives in a glass container in a museum. The San Francisco Chronicle newspaper first wrote about the fish in 1947. The story said the fish looked "strange" and might have been an example of the link between animals that lived in the ocean and those that lived on land.

The fish is named Methuselah after a person said to have lived 969 years in the Bible. While she is not that old, biologists at the aquarium think the fish is about 90 years old. They believe it is the oldest living example of a lungfish in an aquarium. 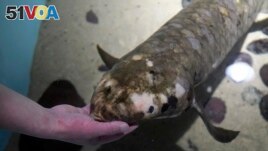 Senior biologist Allan Jan feeds Methuselah, a 4-foot-long, 40-pound Australian lungfish that was brought to the California Academy of Sciences in 1938 from Australia, in its tank in San Francisco, Monday, Jan. 24, 2022. (AP Photo/Jeff Chiu)

Until a few years ago, the oldest Australian lungfish was at the Shedd Aquarium in Chicago. But that fish, named Granddad, died in 2017 at the age of 95.

"By default," said biologist Allan Jan, "Methuselah is the oldest."

Jan looks after the fish in San Francisco. He believes the fish is female but does not know for sure. The aquarium plans to take a very small part of the fish's fin and send it to scientists in Australia. The scientists will try to confirm the fish's age and sex.

Jan said Methuselah likes getting rubbed on her back. He compared her to an "underwater puppy" or young dog. She is a little longer than one meter and weighs about 20 kilograms.

Jeanette Peach is a spokeswoman for the aquarium. She said the fish enjoys eating fresh figs, a type of fruit. "She won't eat them when they're frozen," Peach said.

The aquarium has two other Australian lungfish. Jan said they are thought to be in their 40s or 50s.

The species is now threatened and can no longer be exported from Australian waters. So, getting another lungfish after Methuselah is not likely.

"We just give her the best possible care we can provide, and hopefully she thrives," Jan said.

Does your country have some old animals or fish? What kind are they? Write to us in the Comments Section and visit 51VOA.COM.

aquarium– n. a glass or plastic container in which fish and other water animals and plants can live

default – n. used to describe something that happens or is done when nothing else has been done or can be done — usually used in the phrase by default

fin– n. a thin flat part that sticks out from the body of a fish and is used in moving or guiding the fish through water