Update Required To play the media you will need to either update your browser to a recent version or update your Flash plugin.
By Bryan Lynn
07 December 2022


The city of San Francisco has put a policy on hold that would permit police to deploy armed robots to deal with emergency situations.

The city's Board of Supervisors voted eight to three last week to approve the measure. On Tuesday, however, the board voted to temporarily ban the use of such robots. Board members sent the issue back to a committee for more discussion. They could vote on a new measure in the future permitting use of armed robots.

The policy, considered by the San Francisco Police Department, planned to arm robots with explosives, not guns. Supporters of the policy said it would permit armed robots to be used only in life-threatening situations in which other police methods had failed. 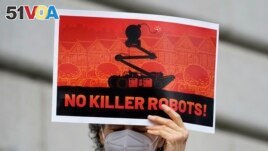 A woman holds up a sign while taking part in a demonstration about the use of robots by the San Francisco Police Department outside of City Hall in San Francisco, Monday, Dec. 5, 2022. (AP Photo/Jeff Chiu)

The measure was strongly opposed by several rights groups and police oversight organizations. Opponents warned that the policy would open the door to future militarization of the police force. They also said it would likely lead to more conflict between police and citizens in poor and minority communities.

A spokesperson for the San Francisco Police Department, Allison Maxie, explained the policy in a statement. She said it would permit officers to deploy robots equipped with explosives "to contact, incapacitate or disorient violent, armed or dangerous suspects."

Maxie added that the use of such robots would only be used in "extreme" situations in an effort "to save or prevent further loss of innocent lives."

The policy under consideration stated that officers could use robots only after officers had tried using other forms of force and de-escalation methods against suspects. Only a limited number of leading officers would be able to approve robots to be used as deadly force.

The San Francisco policy came about because of a California state law. The law requires police departments to examine all military-grade equipment and seek approval from the public for its use.

So far, two California cities – San Francisco and Oakland – have publicly discussed the use of robots as part of the state's legal requirement.

Across the United States, police have used robots over the past 10 years to communicate with blockaded suspects, enter possibly dangerous spaces and, in rare cases, to carry out deadly force. Experts say, however, that the use of such robots remains rare even as the technology progresses.

Dallas police became the first police force to kill a suspect with a robot in 2016. In that case, police used a robot to blow up explosives during a standoff with a shooter who had killed five police officers and injured nine others.

The new San Francisco policy has reopened debates in the U.S. over the ethics of using robots to kill a suspect.

Michael White is a professor in the School of Criminology and Criminal Justice at Arizona State University. He told The Associated Press that even if robotics companies present deadlier methods to police officials, it does not mean departments will buy them.

"It's hard to say what will happen in the future, but I think weaponized robots very well could be the next thing that departments don't want because communities are saying they don't want them," White said.

Protesters marched outside City Hall on Monday to express their opposition to San Francisco's policy. City Supervisor Dean Preston joined the demonstrators. He told other supervisors he felt the public had not been given enough time to voice their opinions on the issue.

"The people of San Francisco have spoken loud and clear: There is no place for killer police robots in our city," he said in a statement after the vote. "We should be working on ways to decrease the use of force by local law enforcement, not giving them new tools to kill people."

The new measure still permits police to use robots to be sent into dangerous situations to keep officers at a safe distance. San Francisco police currently have a limited number of ground robots designed to investigate bombs or provide an extra set of eyes.

Supervisor Aaron Peskin brought forward last week's motion on the city's use of robots. He said, "Having robots that have eyes and ears and can remove bombs – which happens from time to time – is something that we want the police department to do while we continue to have this very controversial discussion."

Speaking about the possible use of armed robots, San Francisco Police Chief Bill Scott said in a statement, "We live in a time when unthinkable mass violence is becoming more commonplace. We need the option to be able to save lives in the event we have that type of tragedy in our city."

incapacitate – v. to weaken a person in a way that prevents him from operating normally

disorient – v. to make someone not know where to go or what to do

escalation – n. to make a situation more serious or worse

standoff – n. a situation in which an argument or fight stops for a period of time because no one can get ahead or win

ethics – v. ideas and beliefs about what kind of behavior is morally right and wrong

controversial – adj. causing a lot of disagreement or argument

tragedy – n. an event or situation that is very sad, often involving death