Two Ways to Track Santa Around the World

Update Required To play the media you will need to either update your browser to a recent version or update your Flash plugin.
By Carolyn Nicander Mohr
21 December, 2016


If you or your children are eagerly waiting for Santa to arrive, you can watch his progress with a Santa tracker. This year, two Santa trackers offer new ways to see where Santa is during his trip on the night before Christmas. These websites also have some other fun activities.

Google has been tracking Santa every December for twelve years. This year, Google's tracker takes you to Santa's Village, which is filled with new ways to follow Santa. Head to Google Santa Tracker to find a countdown clock to Christmas Eve and 24 different activities to pass the time before Santa arrives. 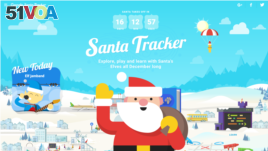 Watch videos such as Santa Gets Back to Work:

Visitors to the site can see translations of Christmas expressions using Google Translate in Santa's Village. You can learn terms in more than 25 languages, including "Elvish." We are not sure that language will be very useful, however.

There are also games on Google Santa Tracker, such as Gift Slingshot, Santa Search and Penguin Dash. You can learn coding skills and find out about charitable organizations that work all year.

One activity is unlocked for each day in December, with categories Explore, Play, Learn and Watch. You can try each activity in order or choose by category.

Google's Santa tracker is also available on Santa tracker app for Android, the Chrome Santa Tracker extension, and a link in Google Maps to Santa's Village.

Google also has a new Santa tracker for educators. That web page has resources to help them teach children geography, coding, languages and more in a fun way.

Listen to NORAD Christmas music while you explore the North Pole. Play games, watch videos and learn the history of how a child dialing a wrong phone number led to the tradition of NORAD tracking Santa.

You can also watch movies about the NORAD Santa Tracker and see a 360-degree view of Santa's Village. The site has a library with interactive books about holiday traditions around the world, Santa history and more. The arcade unlocks a new game every day such as Santalicious, Cookie Crunch and Santa Hop.

Visitors can watch streaming videos of Santa as he prepares for his flight on December 24. NORAD will also answer email questions about Santa's location throughout Christmas Eve.

NORAD Santa Tracker is also available via apps for Android and iPhone and iPad.

Have you tried using a Santa tracker? Share your thoughts in the Comments Section below or on 51VOA.COM.

countdown - n. the act of counting down the time that remains before something (such as the launch of a rocket) happens — usually singular

clock - n. a device that shows what time it is

translation - n. words that have been changed from one language into a different language

charitable - adj. done or designed to help people who are in need

tradition - n. a way of thinking, behaving, or doing something that has been used by the people in a particular group, family, society, etc., for a long time

interactive - adj. designed to respond to the actions, commands, etc., of a user

arcade - n. a place with many games

streaming - adj. playing continuously as data is sent over the Internet