Update Required To play the media you will need to either update your browser to a recent version or update your Flash plugin.
By Pete Musto
20 September, 2015

Satellites can measure conditions on the ground and share the data with communities. A partnership between the National Aeronautics and Space Administration (NASA) and the U.S. Agency for International Development (USAID) has developed such a system called SERVIR.

SERVIR captures images and environmental data, like dangerous weather and changes in water resource use. Scientists feed that information into complex computer programs. The results of the analysis are shared with people living in the affected areas, as well as governments and organizations, to help them react and prepare. 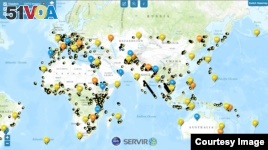 SERVIR map showing locations of sattellite images around the globe.

Dan Irwin is the director of the NASA SERVIR Coordination Office. He told VOA Learning English that the SERVIR project shares important information with countries all over the world.

We need to be able to convert that data ... to address the cares and concerns that countries have around the world. And as NASA we can work with countries ... but it's then, ‘How do we take it even further? How do we go from space to country, down to state or provincial level, down to the village level?'"

Jennifer Frankel-Reed is the Senior Climate Change Specialist for USAID. She explained how SERVIR has helped warn Bangladeshis of flooding, and prevented people in El Salvador from eating unsafe seafood.

In Kenya, which depends heavily on tea farming, farmers have avoided losing crops to rising temperatures.

"The idea is that through our local partnerships with hubs, we can bring that data, analyze it ways that people can use, translate it into easy to use formats and then help people with the decisions that those data inform."

Developed in 2004, SERVIR brought together the U.S. agencies with the World Bank and Central American Commission on Environment and Development. The first hub was established in Panama in 2005, but was closed in 2011. Other hubs were established in Kenya, Nepal and Thailand between 2008 and 2014.

Both Mr. Irwin and Ms. Frankel-Reed said the project's goal was to empower people with information to help them grow.

"We hope to continue to expand... but ultimately and absolutely the most important thing about SERVIR is... enabling amazing people around the world."

The project now operates in more than 30 countries.

Pete Musto reported and wrote this story for VOA Learning English. Kathleen Struck was the editor.

address – v. to deal with a matter, issue, or problem

village – n. a small town in the country

analysis – n. a careful study of something to learn about its parts, what they do, and how they are related to each other

convert – v. to change something into a different form

hub – n. the central and most active part or place

translate – v. to change words from one language into another language

enable – v. to make someone or something able to do or to be something

Now it's your turn. Are science and technology important for how your country makes decisions? How does your country work with the global scientific community? Let us know in the comments section.