Update Required To play the media you will need to either update your browser to a recent version or update your Flash plugin.
By Dan Friedell
02 November 2022


United States security officials say Saudi Arabia has told them Iran may be planning an attack on their land.

The warning from Saudi Arabia comes at the same time that the U.S. is criticizing Iran for sending drones to Russia for use in its war with Ukraine. And the U.S. is also speaking out against Iran's tough measures against street protests.

The U.S. National Security Council released a statement Tuesday saying it is "concerned about the threat picture." The U.S. said it "will not hesitate to act in defense of our interests and partners in the region." 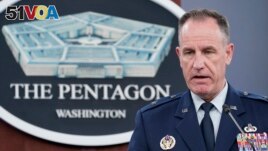 Neither Saudi Arabia, nor Iran, answered requests for comments from the Associated Press.

One U.S. security official confirmed the intelligence report and said there was a threat "soon or within the next 48 hours." However, American embassies and consulates in the area have not yet issued warnings about an attack.

Pat Ryder is the spokesperson for the U.S. Defense Department. He said U.S. military officials are concerned and "we will reserve the right to protect and defend ourselves no matter where our forces are serving."

The Wall Street Journal first reported on the Saudis sharing of intelligence.

Iran is reportedly unhappy with coverage of the protests from Iran International. The Farsi-language satellite news service was once mostly owned by a Saudi national.

The protests in Iran began in late September when a young woman died while under arrest for not covering her hair properly. Since then, at least 288 people have been killed and over 14,000 arrested in protests throughout the nation.

Saudi Arabia and the U.S. have long been concerned about attacks from Iran. In 2019, a drone hit an oil-storage area in eastern Saudi Arabia. The attack hurt the nation's ability to supply oil to the world market. In addition, some parts of Saudi Arabia have been hit by drones sent by Iran-supported Houthi fighters in Yemen.

While Iran said it was not behind the attacks, security officials say similar Iran-made drones have been used by Russia to attack Ukraine this year.

The relationship between the U.S. and the two Middle Eastern nations continues to be tense. The U.S. says it will support Saudi Arabia if it is attacked by Iran. But at the same time, American leaders are thinking about negotiations with Iran to limit nuclear weapons production.

Even with the show of support for Saudi Arabia, the U.S. says it is examining the relationship because of Saudi's action to cut its oil supply. Saudi Arabia is the top oil-producing country in a group known as OPEC. The U.S. says OPEC production cuts help Russia get more money for its oil so it can pay for the war in Ukraine.

drone –n. a small aircraft that flies without a pilot

hesitate –v. to be unwilling to do something because of doubt

region –n. a part of the world

reserve –v. to choose to do something at a later time