Update Required To play the media you will need to either update your browser to a recent version or update your Flash plugin.
By Bryan Lynn
27 September, 2017


Saudi Arabia is lifting its ban on women drivers.

The country's leader, King Salman, ordered the change in a decree.

State media said the decree ordered the creation of a group of ministers. They are to offer advice on steps for giving women legal permission to drive. The order is expected to be carried out by June 2018, reports said. 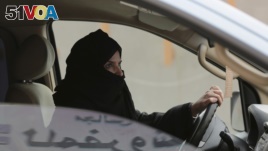 Aziza Yousef drives a car on a highway in Riyadh, Saudi Arabia, as part of a campaign to defy Saudi Arabia's ban on women driving, March 29, 2014. (AP Photo/Hasan Jamali, File)

Saudi Arabia was the only country that refused to issue driver's licenses to women. Those who attempted to drive were detained. As recently as 2014, two Saudi women were detained for more than two months for breaking the rule.

Women's rights activists have been pushing for the right to drive since the 1990s.

Prince Khaled bin Salman is the king's son and the Saudi ambassador to the United States. He told reporters in Washington the decision marks a "huge step forward" and that "society is ready" for the change.

In Saudi Arabia, women are legally required to get approval from a male guardian for legal decisions. These can include education, employment, marriage, travel and medical treatment.

But the prince said women will not need approval from their guardians to get a driver's license and will be able to drive alone in the car. They will have permission to drive anywhere in the kingdom, including the Islamic holy cities of Mecca and Medina.

After the announcement, several Saudi women shared photographs on social media. The images showed them removing ride-sharing apps from their mobile phones. Some women published videos already showing them behind the wheel of a car.

Saudi Arabia is a close ally of the United States. President Donald Trump praised the Saudi leadership for lifting the ban. Trump said the U.S. government will support Saudi efforts to strengthen its society and economy.

"This is a positive step toward promoting the rights and opportunities of women in Saudi Arabia," the White House press secretary said.

Amnesty International said the king's order is a "testament to the bravery of women activists who have been campaigning for years" for the change.

United Nations Secretary-General Antonio Guterres praised the move in a message on Twitter. "I welcome Saudi Arabia's decision to lift the ban on women drivers. An important step in the right direction."

Youssef, a professor at King Saud University, told the Associated Press that she and other women will continue to push for an end to the remaining male guardianship laws.

The decision to lift the ban is part of a larger effort by 32-year-old Crown Prince Mohammed bin Salman to propose economic and social reforms. The prince has faced opposition from powerful conservative clergymen with large followings who have criticized the proposals.

Bryan Lynn wrote this story for VOA Learning English. His story was based on reports from from VOA News, the Associated Press, Reuters and Agence France-Presse. George Grow was the editor.

decree – n. official order given by a person with power or by a government

testament – n. proof or evidence that something exists or is true

issue – v. to release or approve; to cause to come forth