Update Required To play the media you will need to either update your browser to a recent version or update your Flash plugin.
By Dan Novak
06 July 2022


One million Muslims are gathering in the Islam's holiest city Mecca, Saudi Arabia, Wednesday, for the yearly religious visit called hajj. The COVID pandemic severely restricted the hajj in the past two years, including a ban on foreign travelers.

This year, the Saudi government is permitting about 850,000 Muslims from outside the country to make the pilgrimage. 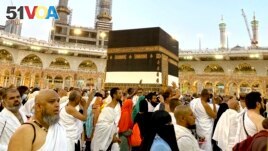 Thousands of Muslim pilgrims circumambulate around the Kaaba, the cubic building at the Grand Mosque, in the Saudi Arabia's holy city of Mecca, Tuesday, July 5, 2022. (AP Photo/Amr Nabil)

The hajj is usually one of the world's largest gatherings. Two-and-one-half-million Muslims took part in 2019.

Those gathering this year are required to be under 65 years old and vaccinated against COVID-19. They also must test negative for the virus within 72 hours of travel. The pilgrims are chosen from millions of requests through an online lottery system.

Saudi officials inspected the holy site on Wednesday and said they were ready to receive pilgrims.

After COVID-19 first began spreading in 2020, Saudi officials permitted just 1,000 pilgrims already living in the country to attend. Last year, the hajj was similarly restricted to 60,000 fully vaccinated Muslims living in Saudi Arabia. The restrictions shocked many in the Muslim world.

Religious pilgrimages raised $12 billion yearly in the country before the pandemic. The pilgrimages account for the largest percentage of Saudi Arabia's total economic activity after oil.

Saudi Arabia is currently seeing about 500 new cases of COVID a day. About 70 percent of the country has been vaccinated against the virus. Last month, the government ended indoor mask requirements and some other prevention measures.

Pilgrims in Mecca are not required to wear face coverings or be socially distanced, as they were during the past two years. However, people are still barred from touching the Kaaba, the Islamic holy building that pilgrims walk around as they complete the hajj.

The Quran, Islam's holy book, says that all Islam's followers who are physically and financially able should make the pilgrimage once in their lifetime. It takes place over five days.

The hajj follows a path that Muslims believe their prophet Muhammad walked almost 1,400 years ago. It is believed to follow the footsteps of earlier prophets named in the Bible.

pilgrimage — n. a journey to a holy place

negative — adj. not showing the presence of a particular germ, condition, or substance

lottery — n. a system used to decide who will get or be given something by choosing names or numbers by chance

prophet — n. a member of some religions who delivers messages that are believed to have come from God