Update Required To play the media you will need to either update your browser to a recent version or update your Flash plugin.
By Susan Shand
11 March 2020


Saudi Arabia has directed the state oil company Aramco to increase its total possible oil production, or capacity. It announced the move at the Saudi Tadawul stock exchange Wednesday.

A short time later, Abu Dhabi's oil and gas company ADNOC said it was increasing production by 25 percent to 4 million barrels per day. 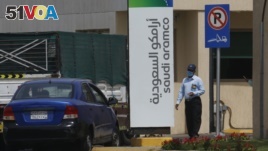 A security person wears a mask as he checks a vehicle entering a compound for Saudi Aramco in Jiddah, Saudi Arabia, Monday, March 9, 2020.

Saudi Arabia is working to flood the market after another oil producer, Russia, refused to agree to oil production cuts.

Worldwide, demand for oil is decreasing as the spread of the new coronavirus has interfered with travel, transport and other industries.

Saudi Arabia had been producing around 9.8 million barrels per day. That amount was in line with an agreement among a number of oil producing nations, including Russia. The cuts were an attempt to stop the oversupply in the market that had pushed prices down.

However, a few days ago, the kingdom's policy changed completely when Russia refused to go along with deeper cuts.

Saudi Arabia is a member of the Organization of Petroleum Exporting Countries, or OPEC. It is expected that other members of that group will also increase production.

The price of unprocessed, or crude oil went down 25 percent on Monday. It was the sharpest decrease since the 1991 Gulf War. By yesterday, the price had increased a small amount. By the end of trading, oil was at $36 a barrel.

Eurasia Group is a private business that researches and advises clients about political risk. It describes the current oil situation as a crisis that could last "several weeks or months, until prices are low enough to change fundamental views in Moscow and Riyadh" and force a compromise.

The Associated Press reported this story. Susan Shand adapted it for VOA Learning English. Caty Weaver was the editor.

fundamental – adj. of or relating to the basic structure