Update Required To play the media you will need to either update your browser to a recent version or update your Flash plugin.
By Caty Weaver
11 May, 2015


The leader of Saudi Arabia will not take part in talks with U.S. and other Arab officials this week. Foreign Minister Adel al-Jubeir announced on the decision on Sunday. He said King Salman will send Crown Prince Mohammed bin Nayef to the U.S.-Arab summit in Washington.

The summit opens Wednesday at the White House. President Barack Obama will welcome representatives of the six-member Gulf Cooperation Council. Then, on Thursday, the talks move to Camp David in the mountains of Maryland. Since the 1950s, presidents have used Camp David to hold meetings away from the noise of Washington and the news media.

U.S. officials say the talks are to include discussions on deepening security cooperation with Gulf nations and "seeking common approaches" to the conflicts in Iraq, Syria, Libya and Yemen.

An Obama administration official said King Salman's decision to stay in Saudi Arabia was "not in response to any substantive issue."

Saudi Arabia has led airstrikes against anti-government fighters in Yemen. Mr. Jubeir cited the summit's overlap with a five-day cease-fire and humanitarian efforts there. 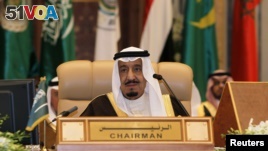 FILE - Saudi King Salman, shown at an Arab summit in Riyadh, January 22, 2013, will not attend a Gulf Summit hosted by the U.S. in Washington this week.

Now, only the leaders of Qatar and Kuwait will be heading their delegations. Kuwait's emir, Sabah Ahmad al-Sabah, traveled to Washington on Sunday. Qatari Emir Sheikh Tamim bin Hamad Al Thani was to leave Doha on Monday.

Oman's Sultan Qaboos bin Said and United Arab Emirates President Khalifa bin Zayed al-Nahyan are missing the summit for health reasons. The delegation from Bahrain will be led by its crown prince, not King Hamad bin Isa Al-Khalifa. Bahrain's government has not said why the King is not attending.

Middle East expert Jonathan Adelman is with the University of Denver in Colorado. He says health and the ceasefire are not the only reasons for the absences of several leaders. He says another problem is disagreements over the direction of international nuclear negotiations with Iran.

Mr. Adelman says that for the United States, Iran is a far-away land and that fact affects U.S. policies and plans. He says officials in Washington think of Iranian officials as somewhat reasonable.

"It's a real difference in perception between the two sides and I think the Saudis and Emirates are really deeply afraid because they don't, well they have deep pockets, they don't have exceptionally first rate militaries."

Jonathan Adelman says he does not think the U.S. will be able to persuade the Sunni Arab countries to support the nuclear deal that is forming. He says those countries first want a security agreement with the U.S. similar to NATO. Or, he says, they want U.S. assistance in strengthening their militaries.

Mr. Adelman says the Obama administration does not seem interested in either idea. And, he says, the U.S. does not appear interested in forming such an alliance.

"It is possible it (the summit) will be a success but I think the fact that the three leaders are not coming is a telltale sign that the odds are stacked against it."

Professor Nabeel Khoury of Northwestern University agrees that the leaders' absence hurts chances for success at the summit. He says he also is not hopeful about the U.S. and Saudi ceasefire plan for Yemen. He said it should help in getting aid to those in need, but not serve the larger goal of ending the Shi'ite Houthi rebellion in the country.

"It's not a hopeful sign in terms of the broader agreement that one is looking for. In other words: stopping this war and moving to the negotiation tables again in a much more effective way than was achieved in the past."

approach – n. a way of dealing with something; a way of doing or thinking about something

cite – v. to mention (something) especially as an example or to support an idea or opinion

overlap – n. to happen at the same time as something else

fundamentalism – n. the strict following and literal understanding of rules and laws, especially about religion