The U.S. Defense Secretary said Wednesday that Saudi Arabian leaders told him they support the agreement on Iran's nuclear program.

He said both the king and the minister expressed their support for the deal. Mr. Carter also told reporters that the king is expected to visit Washington in the fall. 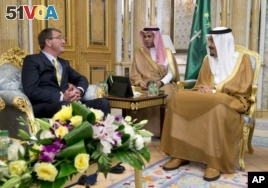 Turkey briefly blocked access to Twitter Wednesday to prevent the spread of images of Monday's bombing in Suruc. At least 30 people died and many others were wounded in the attack.

Turkish officials confirmed that Monday's bombing was a suicide attack. They identified the bomber as Seyh Abdurrahman Alagoz, a 20-year-old Turkish national. The explosion targeted an activist group that was planning to travel to Syria to help rebuild the city of Kobani.

At least 20 people were killed in northern Cameroon Wednesday in two suicide bombings. Officials there are blaming the Nigerian militant group Boko Haram.

The attacks took place in Maroua, the capital of Cameroon's Far North Region. The two attackers were women.

Cameroon banned full-face coverings last week after Boko Haram attacks in the town of Fotokol. The bombers were women dressed as devout Muslims.

The U.S. Attorney General spoke to reporters Wednesday about the suspect in the mass shooting in Charleston, South Carolina. Loretta Lynch said Dylann Roof faces federal hate crimes and firearms charges. She said the charges could lead to a sentence of life in prison or death.

Ms. Lynch said the federal government has not decided if it will seek the death penalty if the suspect is found guilty.

malicious - adj. having or showing a desire to cause harm to another person