Update Required To play the media you will need to either update your browser to a recent version or update your Flash plugin.
By Jim Dresbach
03 February, 2016


Authorities in Saudi Arabia have arrested nine American citizens among a sweep of 33 terror suspects, the Saudi Gazette reported.

They were arrested in a sweep, or roundup, of suspects in response to recent terrorism in the kingdom.

The U.S. State Department says it is seeking details from the government of Saudi Arabia about reports that nine Americans have been detained in the kingdom as terror suspects. 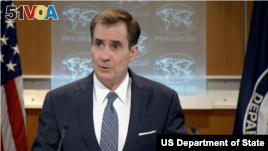 U.S. State Department spokesman John Kirby, speaking Monday, said U.S. officials have seen Saudi media reports of the detentions, and that diplomats are in contact with authorities in Riyadh. He told reporters he could not verify "the actual truth of these reports." (File photo)

The Saudi Gazette did not say if any of those arrested were linked to the Islamic State terror group. U.S. authorities were checking names to confirm if Americans were arrested, reports said.

Also arrested were 14 Saudis, three Yemenis and two Syrians, an Indonesian, a Philippine national and three others.

The arrests took place while Saudi Arabia witnessed several deadly attacks over the past months. Friday, a suicide bomber attacked a Shi'ite mosque in the kingdom's Eastern Province, killing four.

Spokesman John Kirby, speaking Monday, said U.S. officials have seen Saudi media reports of the detentions, and that diplomats are in contact with authorities in Riyadh. He told reporters he could not verify "the actual truth of these reports."

A Saudi website run by the kingdom's foreign ministry showed a list of 5,158 suspects in detention, including eight Americans. It does not identify the Americans by name or gender. It says four of them were detained January 25.

It says four other Americans were arrested in November and December, and that all eight are "under investigation." A ninth American is shown convicted of an unidentified crime in 2007, and the website says the conviction is "subject to appeal."

Sunday's Saudi news report did not say whether any of the Americans is suspected of links to Islamic State extremists, who have claimed responsibility for several deadly attacks against Saudi security forces and minority Shi'ites in recent months.

This story was based on reports from VOANews. Additional information came from the Reuters news service and the Saudi Gazette. Jim Dresbach adapted this story for Learning English. Kathleen Struck was the editor.

sweep – n. the act of picking up someone or something in one quick, continuous motion

roundup – n. the act or process of finding and gathering together people or things of the same kind